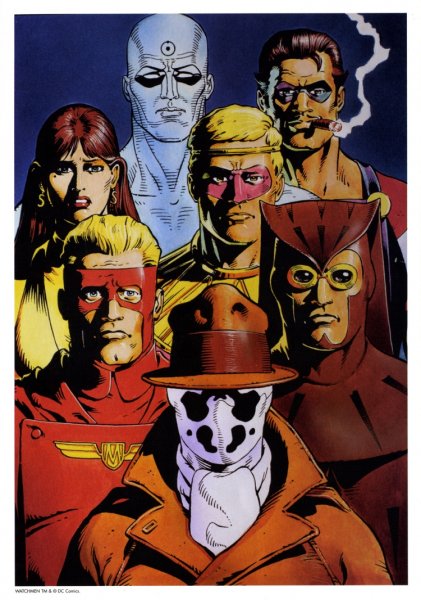 [ad#lb]
The Cartoon Art Museum presents an in-depth look at one of the most anticipated films of 2009 and the graphic novel that inspired it in its latest exhibition, WATCHMEN. The exhibition features dozens of concept illustrations, preparatory sketches and original comic book pages illustrated by Dave Gibbons, the co-creator and illustrator of the critically-acclaimed Watchmen graphic novel. Viewers will be able to follow the creation of the Watchmen universe from Gibbons’s conceptual sketches through his completed artwork to the actual props used in the creation of the Watchmen motion picture, courtesy of the Warner Bros. Corporate Archives.

Details about the Cartoon Art Museum’s February 27 opening reception will be announced shortly.

A complex, multi-layered mystery adventure, Watchmen is set in an alternate 1985 America in which costumed superheroes are part of the fabric of everyday society, and the “Doomsday Clock” – which charts the USA’s tension with the Soviet Union – moves closer to midnight. When one of his former colleagues is murdered, the outlawed but no less determined masked vigilante Rorschach sets out to uncover a plot to kill and discredit all past and present superheroes. As he reconnects with his former crime-fighting legion – a disbanded group of retired superheroes, only one of whom has true powers – Rorschach glimpses a wide-ranging and disturbing conspiracy with links to their shared past and catastrophic consequences for the future. Their mission is to watch over humanity…but who is watching the Watchmen?

Watchmen is directed by Zack Snyder (300) and produced by Lawrence Gordon, Lloyd Levin and Deborah Snyder. The screenplay is by David Hayter and Alex Tse, based upon the graphic novel co-created by Dave Gibbons and published by DC Comics. Herbert W. Gains and Thomas Tull are the executive producers, with Wes Coller serving as co-producer.

Watchmen was originally published by DC Comics as a 12-comic book series between 1986 and 1987, before subsequently being collected into a trade paperback. It is the only graphic novel to win the prestigious Hugo Award or to be named among Time magazine’s “100 Best English Language Novels from 1923 to the Present.”

Watchmen will be released nationwide on March 6, 2009. It will be distributed domestically by Warner Bros. Pictures and internationally by Paramount Pictures. The film has been rated R by the MPAA for “strong graphic violence, sexuality, nudity and language.”