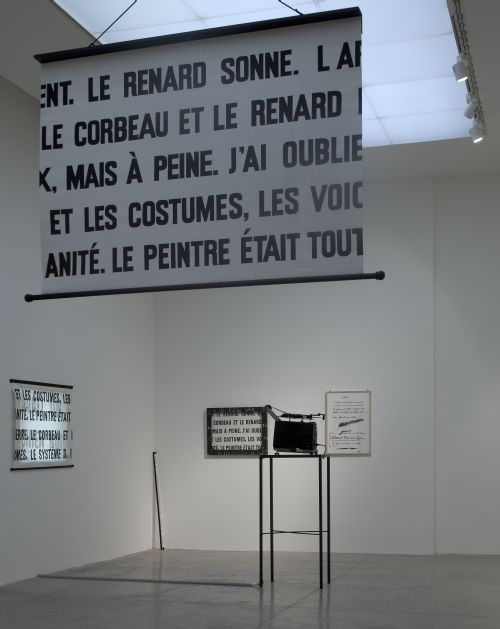 Marcel Broodthaers is one of the most revolutionary and influential figures in the art of the 20th century, and is still indispensable today if we are to understand the development of the artistic and theoretical research of recent decades. His constructive and ironic criticism of the art system as a specific ideological system and the political role of the artist in society has posed questions that are increasingly central in the international critical debate, revealing the forceful topicality of his experimentations intended to explore and redefine the meaning of artistic creation.

Since 1976, the year of his death, exhibitions of his works have followed in rapid succession at some of the most important international museum institutions, such as the Tate Gallery in London, the Walker Art Center in Minneapolis, the Museo Nacional Centro de Arte Reina Sofía in Madrid and the Jeu de Paume in Paris, while the importance of his work has recently been confirmed by the opening of a room specifically devoted to him at the Museum of Modern Art in New York.

In its complexity and scope, the exhibition with which the MAMbo renders homage to the genius of Marcel Broodthaers highlights an artistic path developed over the course of an extraordinary career that lasted just 12 years, from 1964 to 1976. Marcel Broodthaers. L’espace de l’écriture introduces for the first time to the Italian public a wide selection of approximately fifty works coming from prestigious international institutions, including the Hamburger Bahnhof Museum in Berlin, the SMAK in Gent, the MACBA Museum of Contemporary Art in Barcelona and the Caldic Collectie in Rotterdam, which document the main themes of the artist’s poetics: the relationship between art and language, the status of the artwork and criticism of the museum as device and idea.

The curatorial project of the exhibition is intended to verify how the relationship between image, object and word constitutes the central and constant theme of Marcel Broodthaers’research and has strongly conditioned his entire creative process. His original ideas on how the work of art is identified with reflection on itself and on how the social and economic system of art acts as a context of creation and legitimisation, influencing the public’s perception, cannot be understood in all their depth if not in relation to his twenty years of activity as a poet and his subsequent decision to extend his literary vocation in undertaking a new course with a career as an artist in
1964.

The works on display – objects, photographic prints, engravings, slides, editions, books and films – created between 1968 and 1975, sketch out an exhibition concept that is consistent with this key of interpretation and are displayed in relation to each of the different moments into which the exhibition itinerary is structured: The spatialisation of poetry, The object and its image, Le Musée d’Art Moderne, “Décor” : the exhibition.
Also presented are two of the rooms made by Broodthaers for the exhibition L’Eloge du Sujet, held in 1974, the famous Un Jardin d’Hiver II and La Salle Blanche, presented at his last exhibition at the Musée d’Art Moderne in Paris in 1975.

In Marcel Broodthaers’ apparent shift from the discipline of poetry to that of art, the interest in the functioning of language, oral and visual, that he inherited from the masters who were his source of inspiration, Stéphane Mallarmé and René Magritte, proved essential and decisive for the subsequent directions of his work.

It was precisely the latter who in 1946 gave a copy of Mallarmé’s last work, Un Coup de Dés to the young poet Broodthaers; this is a visually and conceptually revolutionary text, consisting of a single long piece of writing without punctuation in which the words are distributed apparently randomly on the pages, composed of different characters and fonts and surrounded by different white margins.
The cancelling out of the traditional concept of space that Mallarmé performed with this work acted like a thunderbolt on Marcel Broodthaers’ artistic path, leading him to sublimate his declared debt of inspiration with the publication in 1969 of a book with the same title and identical typography on the cover, but himself as the author and a different subtitle. Whereas Mallarmé writes “Poème” after the long title, Broodthaers writes “Image”. In Broodthaers’ transfiguration, instead of words, it is lines and black typographical blocks that translate the word into visual structure, highlighting the figurative possibilities of their spatiality on the page.

The exhibition begins with Broodthaers’ first explicit actions as an artist, performed in the second half of the 1960s, to continue with the analysis of his subsequent research in which he progressively broadens the investigation into the relationship between sign and content, between signifier and signified, between truth and deception, creating complex systems of signs that eschew a univocal interpretation, as in his “Musée d’Art Moderne” and in the subsequent “Décors”, full-blown movie sets based on the combination of differing and similar objects in the same space, capable of creating a poem with variable tonalities.

Through a process of exorbitance from the sign of the writing that the specific poetics performs to become space, Marcel Broodthaers delivers the very symbolic power of the image to the language. His work can be seen as an atlas of words, a unique visual alphabet in which combinations of texts and images dissolve the conventional meaning of languages to examine the conditions of the enactment of works of art.