The Nelson-Atkins Museum of Art announced an extraordinary gift from longtime Museum patrons Estelle and Morton Sosland, which will bring one of the nation’s finest private collections of American Indian art to the Nelson-Atkins. The gift of Northwest Coast masterworks strengthens the museum’s comprehensive holdings of American Indian art. The 34 works will be on display beginning in November when the Museum unveils its new suite of American Indian galleries, honoring and giving new emphasis to the artistic achievement of Native peoples from across America. 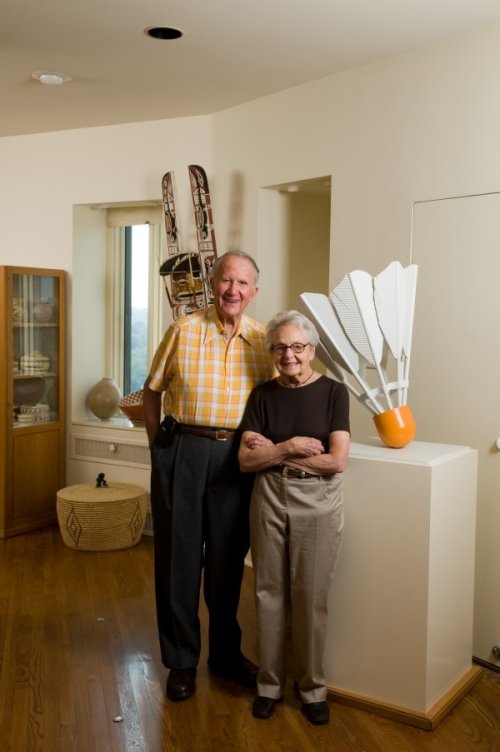 Active on behalf of the Kansas City community, Estelle and Morton Sosland have been involved with the Nelson-Atkins for nearly six decades. Their collection of American Indian art, built over the past 50 years, represents a commitment to connoisseurship that contains superb examples of Northwest Coast artistry, a region defined as the narrow strip of land bordered by the Pacific Ocean and the Cascade Mountains, from Vancouver Island to Alaska’s Yakutat Bay.

“This gift is a triumph of selflessness,” said Marc F. Wilson, the Menefee D. and Mary Louise Blackwell Director/CEO of the Nelson-Atkins. “Morton and Estelle followed their own keen interest in works of the Pacific Northwest and combined that passion with counsel from experts and scholars to assemble this remarkable collection. These works of art have been part of their intimate daily lives, and now they are sharing them with the public at large. It is a fitting capstone to their decades of service to the Museum and an act of enormous generosity.”

“The Sosland Collection is one of the most outstanding groups of Northwest Coast Indian objects in the nation and includes a significant number of true masterworks,” said Steve Brown, former associate curator of Native American Art at the Seattle Art Museum and a leading authority on Northwest Coast objects. “Estelle and Morton Sosland have been thoughtful and dedicated collectors who have passionately pursued some of the finest examples of Northwest Coast art.”

The expansion and reinterpretation of the Museum’s collection have been led by Gaylord Torrence, the Fred and Virginia Merrill Senior Curator of American Indian Art at the Nelson-Atkins and one of the nation’s foremost authorities in the field. Torrence arrived at the Nelson-Atkins in 2002 as founding curator of the Museum’s first Department of American Indian Art.

“This collection is transformative for the Nelson-Atkins and is especially significant because of the extraordinary objects from the Northwest Coast cultures,” Torrence said. “The Museum’s original holdings in this area were limited, and the Sosland Collection allows us to present a comprehensive view of Native American art that we otherwise could not have done. It greatly broadens our presentation.”

Masterworks Within the Sosland Collection
The Soslands began collecting American Indian art more than half a century ago, drawn to works from the Northwest Coast by their sculptural beauty and emotional power. These are objects usually created amid rich family and cultural traditions. The Sosland Collection prioritizes the aesthetic rather than anthropological value of each object, a philosophy reflected in the Nelson-Atkins galleries.

“Because of its natural setting, the civilizations in this area had few concerns about food supply or weather conditions and consequently considered making superb art to be the highest mark of success,” Mr. Sosland noted. “At the Nelson-Atkins, American Indian art is placed on equal footing with the arts of other civilizations. Estelle and I are thrilled to give our collection to an institution that so recognizes—and celebrates—the standing of American Indian art.”

The Sosland Collection began with the purchase in the 1960s of a headdress frontlet from a New York dealer. Soon after, they greatly expanded their holdings with the purchase of a private collection assembled by Denver Art Museum curator Norman Feder, a well-known scholar in the field. Many works in the collection have been exhibited in important exhibitions across the country, including Sacred Circles at the Nelson-Atkins in 1977, now considered a landmark in the recognition of American Indian art. Over the years, significant pieces were selectively added and the collection expanded to include contemporary Northwest and Arctic basketry. Most recently, works were acquired at auction and from the collection of George Terasaki, a preeminent dealer and authority on Northwest Coast works.

Highlights from the Sosland collection include the following masterworks:
· One of the most masterful depictions of Dzunukwa, or Wild Woman of the Woods, an 1870 mask from British Columbia. Dzunukwa was a creature believed to carry off wandering or misbehaving children. Stories of her presence were intended to keep children close to home. This dramatic work conveys the convincing impression of a half-animal, half-human creature of the forest
· A powerful wooden Swan Mask from the Tlingit tribe of Southeast Alaska, from the early 19th century, ca. 1800–1830. The beak is hinged with leather, which would have allowed it to open during performances, giving the mask a lifelike appearance in the firelight. This dramatic effect would have been intensified by the reflective abalone shell inlays.
· A headdress frontlet, ca. 1850, one of several masterworks from generations of the Edenshaw family of the Haidas. This carved wooden frontlet would have been worn on the forehead as the primary element of an elaborate ceremonial headdress. It is attributed to Albert Edward Edenshaw of Queen Charlotte Islands, British Columbia.
· An extraordinary argillite Model Totem Pole, ca. 1965, one of only four by renowned Northwest Coast artist Bill Reid. It is considered one of the finest argillite carvings within the tradition off model poles begun around 1880. Reid has created an intricately detailed and complex carving that depicts an eagle, frog, human figures, bear mother and cubs and killer whale.

Leaders and Benefactors
For more than five decades, Morton and Estelle Sosland have had many roles at the Nelson-Atkins as volunteers, leaders and benefactors, including fund-raising efforts in support of the Generations Campaign and in behalf of the Museum’s campus expansion and endowment fund.

During the 1990s, the Soslands led their family in commissioning Claes Oldenburg and Coosje van Bruggen to create the Shuttlecocks sculptures that grace the Museum’s Kansas City Sculpture Park, now icons for both the Museum and Kansas City. The Sosland Foundation supports social services, education, health and cultural efforts, and was responsible for establishing the Sanders Sosland Curatorship of 20th-Century Art at the Museum in the 1980s. Mr. Sosland’s uncle, Samuel Sosland, endowed the curatorship of American Art at the museum.

Mrs. Sosland is immediate past Chair of the Museum’s Board of Trustees. She held that position during the 2007 opening of the Bloch Building, the acclaimed expansion of the Museum. As a trustee, she served on various committees and was chair of the Committee on Collections, a group that reviews acquisitions and gifts to the Museum. She also headed the Education Committee for a number of years. For many early years, she was a volunteer in the Museum’s Sales and Rental Gallery, which featured the work of regional artists and offered art for sale or rent at a time when Kansas City had few fine art galleries. Mrs. Sosland is a lifelong Kansas City resident who attended Notre Dame de Sion and is a graduate of Smith College.

Mr. Sosland is chairman emeritus of Sosland Publishing Co., which publishes Milling & Baking News, Food Business News and World Grain, with readers in more than 100 countries. The company, started in Kansas City in 1922 to serve the food and grain industry, is now in its fourth generation of family management and ownership. Mr. Sosland is also a native of Kansas City and a graduate of Harvard College. He currently serves on the boards of the Sosland Foundation, H&R Block Foundation and Hall Family Foundation. He previously held a wide range of civic responsibilities and also has been a member of numerous corporate boards.

The Soslands make their home in Kansas City and also in West Sussex, England. They are international travelers who have collected not only American Indian art but also ethnographic works and contemporary art. They have three children, four grandchildren and three great-granddaughters.