WHAT/WHO:
The UM Miller Center for Contemporary Judaic Studies will host a special opening and reception for a series of paintings about the Holocaust by Tom Muhl, a child survivor from Budapest, Hungary. Tom will talk about how his experiences as a ten-year old in the Budapest Ghetto in 1944 are reflected in his art. 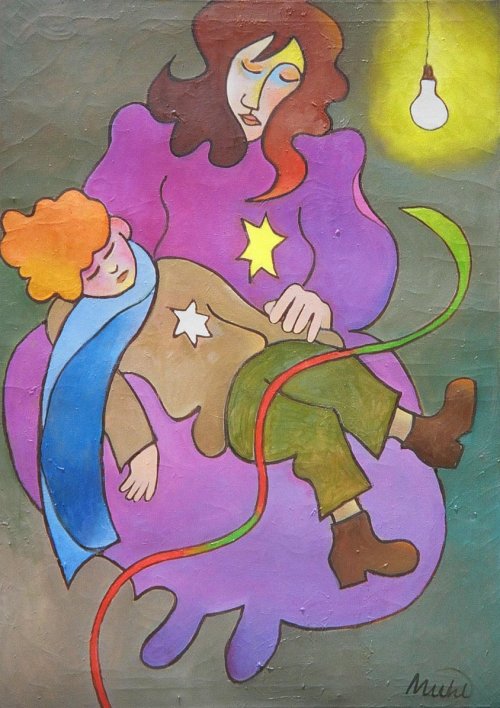 [ad#lb]
WHY:
Painter, writer, designer, Tomas Muhl was born in Hungary and survived the Holocaust as a child in the Budapest Ghetto. Following the 1956 Hungarian Revolution, he left his native country and went to England where he studied at the Royal Academy of Art. He later moved to the United States where he worked as an award-winning artist and Creative Director for prominent advertising agencies, including Young & Rubicam, J. Walter Thompson, and Bates Saatchi & Saatchi. He also created film scripts for documentaries and television as well as print advertising.

Fifty years ago the author fled the Russian invasion of Hungary, braving minefields and Russian tanks. Today he is a successful artist and writer, living in South Florida, dedicated to depicting the beauty and richness of his tropical environment. He knows that in the mind of the eternal exile, there is a fine line between courage and cowardice.

His paintings, now on display at the Miller Center, exhibit a sharp contrast between subject and color. Bright hues intertwine with grim storytelling – as the artist retells through his art the vision of a ten year old’s experiences during the Holocaust

The paintings on exhibit are listed here (and chronicle the year of 1944):
1. Chainbridge Massacre, Budapest
2. View from My Window, Budapest
3. Village of Cegled, Hungary
4. Homeless in Budapest
5. Mother and Child, Budapest Ghetto ( A Jewish ‘Pieta’)