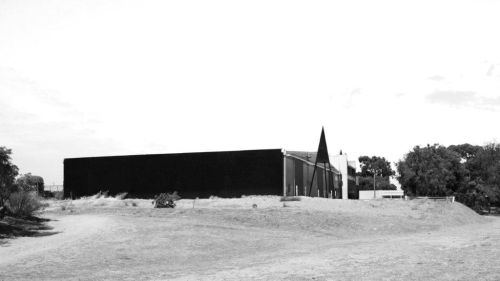 Covering more than 700sqm, it will be largest private commercial gallery in the country with some 500sqm of internal exhibition space and a 200sqm of sculpture grounds.

This giant and visually striking new art space is situated in a converted industrial warehouse in Pearse Street, North Fremantle.

The new gallery is committed to promoting and nurturing the visual arts with a particular emphasis on Western Australian artists.

Gallery directors Andreia and Ben are keen to support and enhance the careers of the artists they represent by taking their work to the international market via the annual art fairs and supporting their work though the annual acquisitive prize and other collaborative ventures.

Andreia (28), an avid art collector herself, also has plans to establish an extensive private art collection to be shown publicly at the North Fremantle exhibition space.

Ben (also 28), a Curtin University graduate and acclaimed artist and curator, has worked throughout Australia and overseas. In 2002 he co-curated Hotel6151, a major multi-arts project involving more than 50 artists, theorists and performers, fashion designers, musicians and filmmakers from around the world. Hotel6151 gained international success and received press coverage and critical acclaim in Australia, Spain, France and England.

Ben also put together the highly successful Linden1968 show in St Kilda, Melbourne in 2008 in collaboration with curator Hannah Matthews. The exhibition, housed in the former Linden guest house, featured emerging and established WA-based artists. It offered an interpretive and contemporary response to the events and happenings of 1968 including the Apollo 7 mission, the assassinations of Bobby Kennedy and Martin Luther King and the ongoing fallout surrounding the disappearance of Prime Minister Harold Holt the previous year.

More recently, Ben has completed artist residencies in London and Berlin and coordinated the Australian Pavilion at the Venice Biennale.

Upon his return to Perth in 2010, Ben met Andreia and the partnership of artist-curator and art collector was formed and the idea first conceived for an entirely new type of super-sized commercial gallery and contemporary art space.

This dynamic pair is passionate about the arts, the WA arts scene and the city of Perth, which they both feel is too often the victim of negative ill-informed press, unfair criticism, and comparisons to cities like Melbourne.

Andreia’s passion for art complements Ben’s creative and curatorial skills and his experience putting together successful exhibitions in Australia and overseas.

Robert Rauschenberg’s Combine of 1955, Short Circuit, was acquired by Art Institute of Chicago Richard Diebenkorn at Modern Art Museum of Fort Worth