Robert Rauschenberg’s Combine of 1955, Short Circuit, was acquired by Art Institute of Chicago

The Art Institute of Chicago announces a major acquisition by the museum’s Department of Contemporary Art: Robert Rauschenberg‘s Combine of 1955, Short Circuit. This visually arresting and autobiographically rich work is the first major Rauschenberg Combine to enter the permanent collection of the Art Institute, thus enabling the museum to more fully represent the key turning points in 20th-century American art. Short Circuit encapsulates themes that Rauschenberg would pursue for decades and that mark him as one of the most important artists of our time. Short Circuit was acquired from the artist’s estate through the Gagosian Gallery. 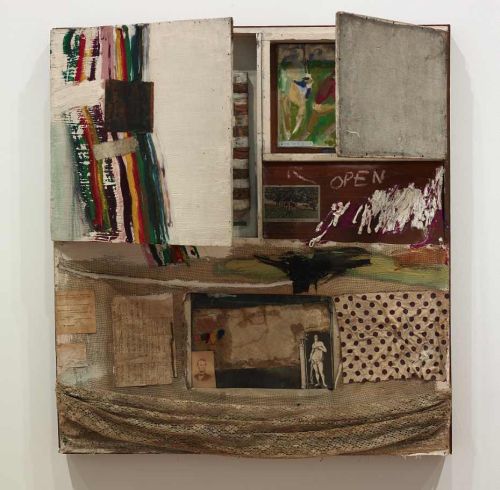 Rauschenberg was one of the most significant artists of the mid-20th century in the United States, recognized for his role in finding a path from the earnest and somber heroics of the Abstract Expressionist painters in the 1940s to the saturated, jubilant vocabulary of Pop Art in the 1950s and 1960s. Created in 1955, Short Circuit is one of Rauschenberg’s earliest “Combines,” or mixed-media assemblages that integrate three-dimensional objects with two-dimensional painting, that were themselves the subject of a major exhibition in 2005 and 2006. Art historically rich, Short Circuit is also rife with autobiographical associations and transformations over time.

Short Circuit was originally submitted by the artist for an annual exhibition at the Stable Gallery in 1955. As the story goes, participants in the gallery’s annual shows could propose new artists for the following year’s exhibition–but that rule changed the year Short Circuit was submitted to the gallery. To protest this new policy that excluded new artists, Rauschenberg invited artist friends Jasper Johns, Ray Johnson, Stan VanDerBeek, and his ex-wife, Susan Weil, to produce small works of art that could be incorporated into the cabinet-shaped construction of Short Circuit. Johns and Weil were ultimately the only artists who contributed works in time to be “smuggled” into the exhibition, behind Short Circuit ‘s two hinged doors of different sizes. A painting by Weil appears behind the right door, and a flag composition by Johns once sat behind the left door but was stolen ten years after Short Circuit was made, in 1965. Following the theft, Rauschenberg asked the artist Sturtevant–whose artistic practice centered on repeating immediately recognizable works by contemporary artists, particularly Johns, to question notions of originality and authorship–to create a reproduction of Johns’s flag painting as a replacement. As a result, the Sturtevant Flag within Short Circuit is an original work of art by Sturvetant, neither a copy nor a nostalgic replica. This replacement Flag fits perfectly into Rauschenberg’s practice of placing existing images into new referential contexts that challenge accepted definitions of art.

In 1955, the year Short Circuit was made, Rauschenberg began inserting personal relics into his Combines as well as fragments of windows, doors, and fabric that evoke the concept of home. In Short Circuit , a piece of netted material, possibly from a curtain, stretches across the bottom of the collage. In addition to the works by Johns and Weil, both of whom had romantic relationships with the artist, Short Circuit includes a Judy Garland autograph; a program from a John Cage and David Tudor performance; a postcard of grazing cows from Uniontown, Alabama; an image of Abraham Lincoln (who is also a featured player in the Art Institute’s 1958 Lincoln by the artist); a frayed textile patterned with polka dots; a textile with a floral motif; a silver gelatin print of Renaissance painter Lorenzo di Credi’s c. 1493 Venus; and a notebook page containing handwritten words and individual letters.

Thus in its development and final execution, Short Circuit functions almost as a primer of Rauschenberg’s conceptual and aesthetic concerns: highly personal and art historical references collide; existing images are constantly recontextualized and reworked; and elements of concealment and secrecy are always present. As Rauschenberg himself said about the work, “This collage is a documentation of a particular event at a particular time and is still being affected. It is a double document.”