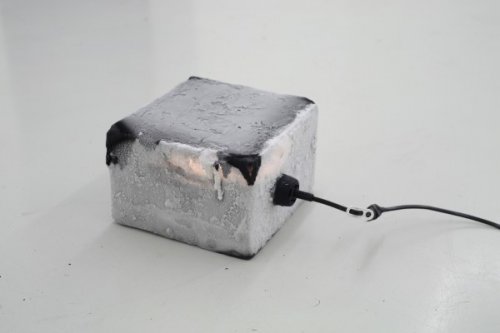 [ad#lb]
On October 9 the Solomon R. Guggenheim Museum opened Intervals: Kitty Kraus, the second installment of a new contemporary art series designed to reflect the spirit of today’s most innovative practices. Fast-paced and modest in scale, this experimental series, initiated by Chief Curator Nancy Spector and launched in spring 2009, allows the museum to respond quickly to innovations and new developments in contemporary art as they arise. Conceived to take place in the interstices of the museum’s exhibition spaces, in individual galleries, or beyond the physical confines of the building, the program invites a diverse range of artists to create new work for a succession of solo presentations.

Intervals: Kitty Kraus is organized by Nancy Spector; Joan Young, Associate Curator of Contemporary Art and Manager of Curatorial Affairs; and Katherine Brinson, Assistant Curator. The exhibition will be on view through January 6, 2010.

Kitty Kraus (b. 1976, Heidelberg, Germany) works in a spare, elegiac vocabulary of monochrome forms and humble materials such as lightbulbs, mirrors, ice, and cloth. For Intervals, Kraus has installed two sculptures in the Annex Level 5 gallery of the museum. Her works, such as Untitled (2009), formed from panes of household glass balanced in tense equilibrium, at first recall the cool, geometric precision of Minimalism, but can also possess an internal volatility that prompts their gradual fragmentation or sudden collapse. The spirit of Kraus’s practice is thus more aligned with the focus on process and alchemic transformation associated with Post-Minimalist art, such as the Arte Povera movement of the late 1960s or the work of Joseph Beuys and Robert Smithson.

The trajectory of dissolution at the heart of Kraus’s work is encapsulated in her series of bulbs or microphones encased in blocks of frozen ink, an example of which is presented in the Intervals exhibition. In Untitled (2009) the heat from the embedded lightbulb gradually melts the ice, leaving only a residue of murky liquid pooled on the gallery floor. As a young artist defining her career at the beginning of the twenty-first century—a time of profound questioning and global crises—Kraus rehearses the trend towards degradation and entropy, finding a mournful beauty in the literal and symbolic failure of form.

Intervals marks Kraus’s first solo exhibition in the United States. She has participated in numerous group shows in Europe and, in New York, The Generational: Younger Than Jesus at the New Museum (2009) and modern modern at the Chelsea Art Museum, Miotte Foundation (2009), and has had solo exhibitions at the Kunsthalle Zürich (2008) and the Kunstverein Heilbronn (2008) as the winner of the blauorange 2008 art prize awarded by the German cooperative banks Volksbanken and Raiffeisenbanken. Kraus lives and works in Berlin.

Following Intervals: Kitty Kraus, a third Intervals presentation is planned for spring 2010, with a subsequent exhibition later in the year.

The exhibition series is funded by the generous contributions of the Intervals Leadership Committee. Chaired by Young Collectors Council member Jeremy Steinke, the group comprises high-level Guggenheim members who are committed to the realization of Intervals projects and who enjoy a privileged insight into the processes behind them through dialogue with the curators and artists.

KARAOKE – Photographic Quotes Apostles of Beauty: Arts and Crafts from Britain to Chicago