Donation of Mexican Prints to IMMA

A collection of 52 prints, by leading Mexican artists, recently acquired by the Irish Museum of Modern Art were unveiled today (Tuesday 13 November) at IMMA. The works, commissioned by the Mexican National Print Museum (MUNAE), have been donated to the Museum as a gesture to mark the historical ties between Mexico and Ireland. The donation has been coordinated by HE Carlos García de Alba, Ambassador of Mexico. 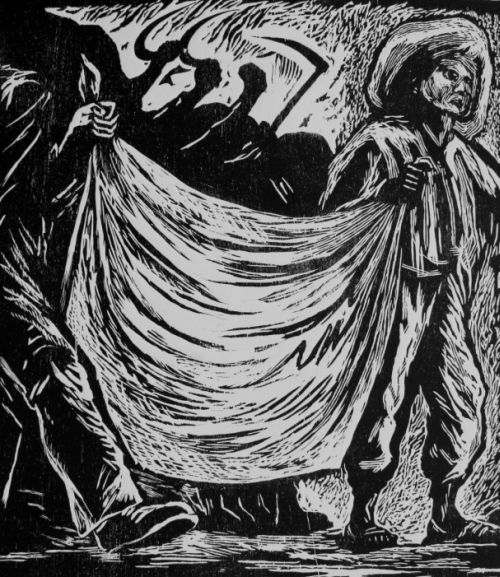 In 2010 Mexico celebrated two anniversaries: the bicentenary of the country’s independence and the centenary of its Revolution. As part of the national commemorative cultural programme, MUNAE commissioned a limited edition collection of 52 prints by 52 artists. The intention was to assemble a representation of contemporary graphic art by Mexican and international artists which would reflect their vision of the processes which shaped Mexico’s history, as well as contributing and helping shape the future of Mexican graphic art. The collection contains works by renowned Mexican artists working in print today including Fernando Aceves Humana, Roberto Turnbull and Helen Escobedo as well as a sculptural work by Leonora Carrington.

Commenting on the donation, Christina Kennedy, Head of Collections, IMMA, said: “this new gift adds substantially to our collection of prints and multiples. We are particularly delighted that it introduces the work of Leonora Carrington to the Collection. Of Irish origin, Carrington lived and worked for more than 60 years in Mexico until her death at 94 in 2011. A bronze, Sculture/Vulturel, 2010 will be included by IMMA in a major exhibition of her work in 2013.”

The Mexican Ambassador, Carlos Garcia de Alba, said: “Mexican culture, as Irish culture, is millenarian, rich and diverse. Art and culture have always been a key component of the relationship between both countries. Today, with this donation, we are adding a new solid brick in the bridge that historically has united Mexico and Ireland.”

Ireland and Mexico have many shared experiences and a rich cultural history. IMMA’s programme has featured many contemporary Mexican artists or artists who have worked extensively there. These have included Distant Relations: A Dialogue among Chicano, Irish and Mexican Art and Cultural Writing in 1996, the more recent exhibitions of Mexican inspired works by Francis Alÿs and the highly-acclaimed exhibition in 2011 of works by Frida Kahlo and Diego Rivera from the Gelman Collection of Modern Mexican Art. IMMA’s permanent Collection also includes a major installation work by the renowned young Mexican artist Carlos Amorales. In addition, there are significant graphic works by Mexican, and other Latin American artists, which were donated to the IMMA Collection in 2000 by the Smurfit-Kappa Group.