Will Eisner: Father of the Graphic Novel 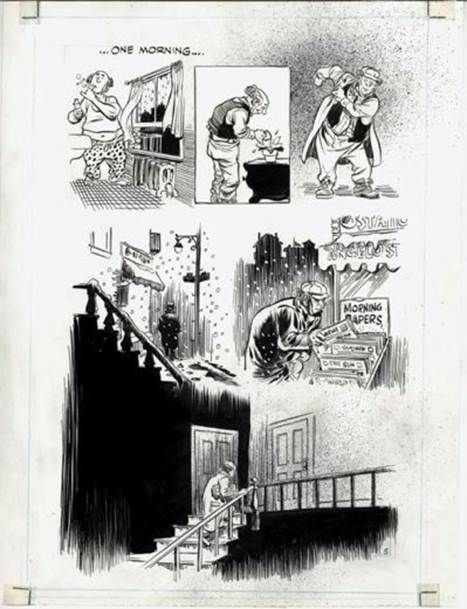 The Cartoon Art Museum is pleased to present Will Eisner: Father of the Graphic Novel, an exhibition of the master storyteller’s work from July 27 to November 10, 2013. This exhibition features artwork from seven of Will Eisner’s most celebrated graphic novels as selected by exhibition curator Denis Kitchen of The Denis Kitchen Art Agency.

Will Eisner (March 6, 1917 – January 3, 2005) was an acclaimed American artist, comics writer, teacher, and entrepreneur. He is considered one of the most important contributors to the development of sequential art, a term he coined. He is known for the cartooning studio he founded; for his highly influential comic series The Spirit; for his use of comics as an instructional medium; for his leading role in establishing the graphic novel as a form of literature with his groundbreaking 1978 graphic novel, A Contract with God and Other Tenement Stories; and for his educational work in the medium as exemplified by his three textbooks. In a career that spanned nearly seven decades — from the dawn of the comic book to the advent of digital comics — Will Eisner was truly the “Father” of the Graphic Novel.

The artwork featured in Will Eisner: Father of the Graphic Novel has been selected primarily from Eisner’s graphic novels; a form of artistic expression that he helped to popularize. Many of the stories represented in the gallery convey Eisner’s personal understanding of the complexity of the human experience, especially among working-class immigrants. A Contract with God investigates the lives of Depression era characters in the tenements of New York City; while his graphic novel To the Heart of the Storm is an autobiographical novel about a young man who recalls his life while riding a troop train during World War II; his poverty stricken home life, the anti-Semitism he and his family have faced, the family stories his parents recounted. Other artwork in the exhibition is from Eisner’s Dropsie Avenue, City People Notebook, Life on Another Planet, Family Matter and Minor Miracles.

Will Eisner received many awards and accolades during his career including the National Cartoonists Society Reuben Award, the Lifetime Achievement Award from The National Federation for Jewish Culture (the second person ever so honored), and multiple Eisner and Harvey Awards. The Will Eisner Comic Industry Award is named for him and has been presented annually for 25 years at Comic-Con International in San Diego, North America’s largest comics convention.