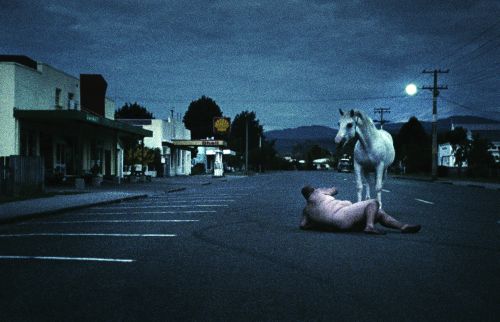 This new exhibition Breath – the fleeting intensity of life draws together Ward’s career as a feature filmmaker and his early training in fine arts. His recent exploration of the still image presents works that coalesce photography, painting and digital imaging alongside filmic vignettes and sound.

Ward’s ongoing concerns with metamorphosis, light, darkness and immersive experience has led him to create a series of physically imposing works that delve into otherworldly landscapes and transcendent states, seeking elusive ‘transformational moments’ that connect with the human psyche.

Presented from 10 December 2011 to 26 February 2012, this exhibition is the first survey of filmmaker Vincent Ward’s work within an art museum context. A publication with a commissioned essay by novelist Louis Nowra will accompany the exhibition.

Vincent Ward is a filmmaker and painter who developed a unique aesthetic language for a ‘motion painting’ technique that won an academy award in 1999 for its application in the film What Dreams May Come. Ward originally trained as a painter, graduating with honours in Fine Arts from the University of Canterbury in 1980. It was through painting that he initially found his way into filmmaking.

His films have seen recognition at both the Academy Awards and the Cannes Film Festival and have repeatedly received acclaim for their strong iconic imagery. The Boston Globe has called Ward ‘one of films great image-makers’.

Ward says his films have been a starting point for fresh exploration in his new mixed media work.

“Somewhere between the world of motion, film and painting I am currently working to find an alchemical marriage between these different media,” Ward says.

“The exhibition conveys the concept of ‘wehi’, where fear and awe collide. It is a celebration of life’s intensity,” he says.

Curator and Govett-Brewster Art Gallery Director Rhana Devenport says Vincent Ward has a strong association with Taranaki through his films Vigil and The River Queen and his executive producer role on the film The Last Samurai, so it is appropriate that his first contemporary art exhibition is held in the region.

“Vincent Ward has evolved a powerful and haunting emotional and visual register within filmic worlds. His recent explorations with still images delve deeply into his abiding concerns with transcendence and acute moments of loss and discovery. This exhibition also presents an orchestrated installation of moving image and sound, distillations and meditations drawn from his own filmic language,” Ms Devenport says.