An art project commissioned by The Mint Museum has reignited an old debate over whether Queen Charlotte – the city’s namesake – was part black. 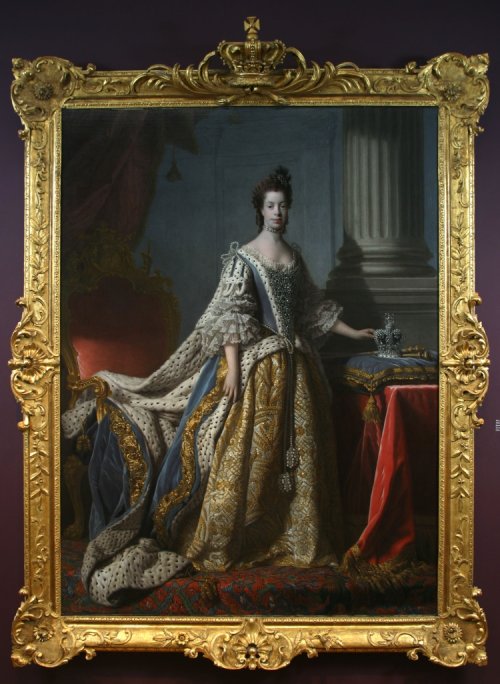 [ad#lb]
This week, the London-based Guardian newspaper ran an article exploring the theory that King George III’s wife had African ancestry, stemming from a recent art commission for the new Mint Museum in Center City. In honor of the upcoming 250th anniversary of Queen Charlotte’s coronation, The Mint Museum has commissioned American artist Ken Aptekar to create a contemporary interpretation of its Portrait of Queen Charlotte by 18th century painter Alan Ramsay. Aptekar’s contemporary interpretation of the royal portrait will be housed in the new Museum, scheduled to open in the fall of 2010.

With his reinterpretation of Queen Charlotte’s portrait, Aptekar is placing special emphasis on his subject’s cultural background. An argument by the noted historian Mario de Valdes y Cocom claims that the queen, though German, was directly descended from a black branch of the Portuguese royal family related to Margarita de Castro e Souza.

As part of his creative process, Aptekar visited Charlotte last May and held focus groups with community members to discuss their reactions to the subject of his work. Aptekar told the Guardian: “I took my cues from the passionate responses of individuals whom I asked to help me understand what Queen Charlotte means to them.” The resulting suite of paintings will include close-ups of the queen’s face overlaid with the words “Black White Other” and “Oh Yeah She Is.”

The full article is available online at: www.guardian.co.uk/world/2009/mar/12/race-monarchy.

Known for connecting paintings from the past to the present, Aptekar has exhibited his work at numerous national and international art venues, including the Corcoran Gallery of Art in Washington, D.C., and the Victoria and Albert Museum in London. In addition to the Mint’s commission, Aptekar is also developing projects for the Louvre in Paris and the National Portrait Gallery in London. He expects to complete his reinterpretation of Queen Charlotte in May 2009.

The Mint Museum is presently involved in a major expansion project: the construction of a new 145,000-square-foot facility in Center City Charlotte and the reinstallation of the historic United States Mint facility on Randolph Road. Scheduled for completion in 2010, the new facility will house important collections of American Art, Contemporary Art and Craft + Design. Following the opening of the Center City location, collections at the Randolph Road facility will be reinstalled with a fresh new vision. Galleries there will feature the Mint’s superb Ceramics, Art of the Ancient Americas, and Historic Costume and Fashionable Dress collections.

The Romance of the Rose: Visions of Love in Illuminated Medieval Manuscripts Frank Lloyd Wright: From Within Outward