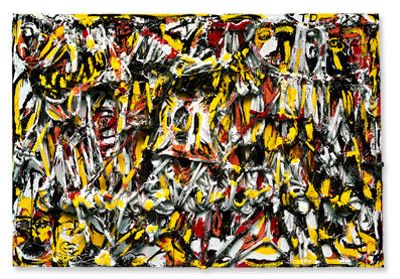 Thornton Dial is a keen observer of the human spectacle and its narratives of corruption and moral strength, folly and triumph. As an artist, he has spent the last two decades exploring the truth of American history and culture in all its complexities and contradictions. This exhibition presents a major survey of Dial’s work, an epic gathering of over fifty large-scale paintings, sculptures and wall assemblages that address the most compelling issues of our time.

Born and raised in the rural South, Dial spent his childhood toiling in the farm fields of western Alabama, followed by decades spent as a laborer in the region’s factories and heavy industry. A working-class man whose art was weaned in the unheralded expressive practices of the black vernacular South, Dial speaks in a voice long overlooked in the canons of modern art and culture. Since his discovery in the late 1980s, critics have likened Dial’s complex and tumultuous creations to the renowned works of such artists as Jackson Pollock and Anselm Kiefer.

To create his art, Dial employs a vast universe of symbolically charged materials — from plastic grave flowers, child’s toys, bed springs and carpet scraps to cow skulls and goat carcasses. Salvaged from garbage cans and trash heaps, these items reappear in dense accumulations amidst the artist’s fields of dripped paint and expressionistic brushworks.

Over the years, Dial has tackled a wide range of social and political subjects in his art, from gripping commentaries on the homeless, the abuse of the environment, and the failings of global capitalism to haunting meditations on the War in Iraq, Hurricane Katrina, and the tragedy of 9/11. Concerned with representing those otherwise rendered invisible within the contours of history, he has also created many works on the plight of women, labor, the rural poor, and the impoverished underclass. Still other paintings and sculptures examine the long history of racial oppression in America. Recounting the atrocities of slavery and Southern sharecropping, the aspirations of the Great Migration, the flight for Civil Rights, and other episodes in black memory, these pieces form a powerful anthology on the human struggle for freedom and equality.