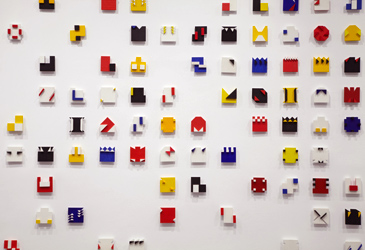 Magnetized Space is the first major exhibition of Pape’s work to be presented in the UK. The exhibition brings together well-known and previously unseen works, spanning sculpture, performance, paintings, films, poems, engravings and collages.

Pape was a founding member of the Neo Concrete movement, which was dedicated to the inclusion of art into everyday life. Pape’s early work developed out of an interest in European abstraction. However, she and her contemporaries went beyond simply adopting an international style, and started to draw on their own local situation.

Neo Concretism is often seen as the beginning of contemporary art in Brazil and Pape’s work – which focused on the coming together of aesthetic, ethical and political ideas – has formed an important part of Brazil’s artistic identity.

The exhibition presents work from throughout Pape’s career, including early drawings and poems from her Concrete period to her Neo Concretist Livros (Books) and Caixas (Boxes) series as well as ballets and performances such as Divisor (Divider) and O ovo (The Egg). Many of these works were created in response to the political repression growing in the late 1960s and reflected the artist’s strongly critical views on Brazil’s elite. Pape’s late works focused on the depiction of emotion and sensation, and have been described by Hélio Oiticica – a contemporary of Pape’s – as ‘permanently open seeds’.

Anri Sala at Serpentine Gallery (London) ArtTube: the platform will be enhanced with the participation of four other renowned museums