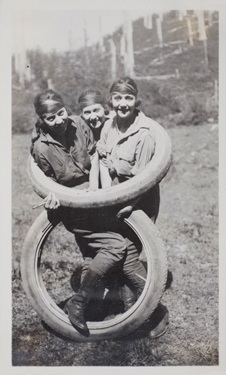 Photographs of celebrations, vacations, and gatherings of family and friends are taken and kept with the aim of preserving moments in life for future generations. What happens, however, when a snapshot becomes an image “type”–transferred into the hands of a collector and folded into a broader cultural history? This subject is explored in the Art Institute of Chicago’s The Three Graces–on view October 29, 2011, through January 22, 2012, in the museum’s Photography Galleries 3 and 4. The exhibition, featuring a private collection of more than 500 anonymous images depicting female trios, spans nearly a century of female role-playing for the camera. These mostly American “found” photographs, spanning from the 1890s to the 1970s, collectively reveal a great deal about the evolving ritual of women’s self-presentation, a theme already idealized in Classical culture with depictions of “The Three Graces.”

New York collector Peter J. Cohen, who has spent decades scouring flea markets, shops, and galleries in search of rare amateur photographs, amassed this image collection and gave it its title. Cohen was struck by the frequency of images featuring female trios, and had the wit to identify in them a playful echo of the Greek muses Aglaia, Euphrosyne, and Thalia, who are said to personify beauty, charm, and grace in both nature and humanity. Cohen owns some 20,000 anonymous snapshots spanning from the late 19th century until the 1970s. He has organized his mountainous holdings according to many classifications, among them “Double Exposures,” “Up on The Roof,” and “Dangerous Women.”

For Art Institute exhibition coordinator Michal Raz-Russo, who also authored the accompanying book, the “three graces” theme serves as a frame through which to chart shifts and continuities in women’s self-understanding across nearly a century. The 1888 introduction of the Kodak #1 camera and the 1900 debut of the Kodak Brownie made photography immensely popular, and much of the marketing was directed at women. Modern life and leisure in the 1920s coincided with the arrival of smaller cameras, faster film speeds, and automatic exposures; women of the expanding middle class became practiced at self-portraiture while vacationing or camping on their own. Later, in the mid-20th century, a clear convergence can be seen between women’s self-portraits and ideals of womanhood promulgated in films and glossy magazines. Throughout this history, men are clearly at work too, convincing women to participate in erotic poses according to another set of visual models. While the varieties of picturing and self-picturing are complex, The Three Graces demonstrates that women worked to define themselves as social beings through photography.

Visitors to the exhibition can find information on individual snapshots–gleaned from inscriptions and the clues provided by clothing and setting–at a special computer kiosk located in the gallery. Visitors are encouraged to add further information and comments there or online at www.artic.edu/ThreeGraces.