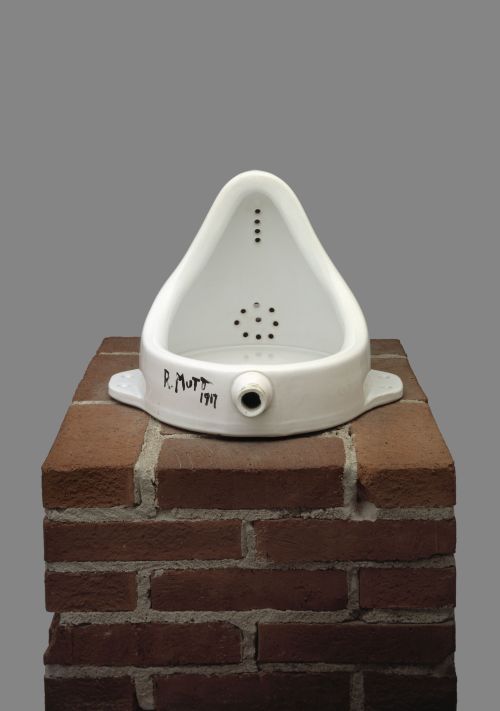 Marcel Duchamp (1887-1968) emphasised the importance of the concept in a work of art. He was one of the first proponents of open art, where the interpretation of the viewer or posterity contributes to the creative act and thus to the meaning of the work. Moderna Museet has one of the world’s finest collections of Marcel Duchamp’s art, and fourteen of these works are now being shown at Moderna Museet Malmö.

Marcel Duchamp painted his last cubist-like painting in 1912. Shortly thereafter, he started on his big glass piece, La mariée mise à nu par ses célibataires, même (The Bride Stripped Bare by Her Bachelors, Even). He worked on this enigmatic and ambitious work for ten years, and made only a few paintings after 1912. Two years later, he decided to emigrate to the USA. He arrived in New York in 1915, where he was already famous thanks to his previous works, including Nude Descending a Staircase No. 2.

Readymade is a term that was coined by Duchamp at the time to describe the objects he selected and presented as art. The first of these, Roue de bicyclette (Bicycle Wheel), is from 1913, and was followed by Porte-bouteilles (Bottle Rack) in 1914. His famous Fountain was presented in 1917. A couple of years later, Duchamp embarked on his big glass piece, The Bride Stripped Bare by Her Bachelors, Even, which he abandoned in 1923 and never completed. The work consists of two glass panes divided by a distinct borderline. Duchamp called them domains, where the upper belongs to the bride and the lower to her nine bachelors.

When Moderna Museet was planning its legendary exhibition Movement in Art in 1961, Pontus Hultén wanted to borrow the Glass from the Philadelphia Museum of Art. When this proved impossible, the art critic Ulf Linde and the artist PO Ultvedt were commissioned to make an exact replica. This was completed in two months in consultation with Duchamp, who later signed this replica. Thirty years later, Ulf Linde made a further replica, helped by the artists Henrik Samuelsson and John Stenborg, to have the opportunity to correct the mistakes he had discovered over the years in the first attempt.

For an exhibition in Stockholm in 1963, Ulf Linde decided to make replicas of several of Duchamp’s readymades, with the approval of the artist. These were subsequently shown at exhibitions around the world in the 1960s, where Duchamp signed them. All these works are now in the Moderna Museet collection.