The Photographs of Homer Page: The Guggenheim Year, New York, 1949-50
Rare Photographs from the Nelson-Atkins’ Hallmark Collection to be Displayed 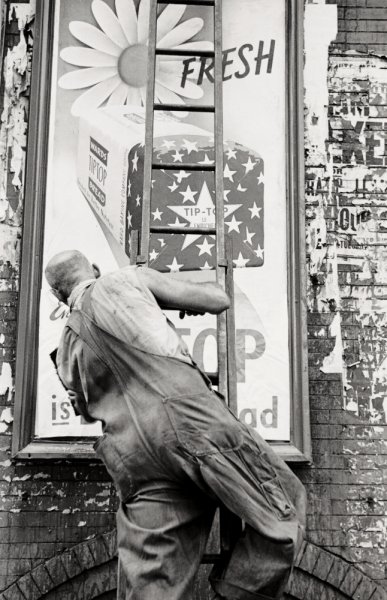 [ad#lb]
Homer Page, a brilliant but nearly forgotten photographic talent, will be reintroduced to the public when The Photographs of Homer Page: The Guggenheim Year, New York, 1949-1950 opens Feb. 14 at The Nelson-Atkins Museum of Art.

The exhibition of rare vintage black-and-white prints, on view through June 7, will focus on the innovative work he produced in New York in 1949 and 1950, funded by a prestigious Guggenheim Fellowship.

These works are drawn from a total of about 100 prints by Page in the Museum’s Hallmark Photographic Collection, acquired by the Nelson-Atkins in 2006.

Because Page exhibited and sold very few of his works during his lifetime, he is underappreciated and largely unknown today. This exhibition marks an important first: this group of prints has never been publicly displayed.

Keith F. Davis, Curator of Photography at the Nelson-Atkins, first encountered Page’s work while researching and writing the first edition of An American Century of Photography, published in 1995.

Davis, then Hallmark Fine Art Programs Director, recalls: “I came across a quote from Page that I found extremely interesting and insightful.” Page’s comments from a 1950 symposium at the Museum of Modern Art titled What is Modern Photography? revealed a deep understanding of the currents of “documentary” or what we might now call “street” photography of the day. The quote prompted Davis to search for Page’s photographs, leading to an exciting discovery of a “lost” photographic treasure. He was soon in touch with the Page estate and ended up purchasing about 100 prints for the Hallmark collection, including many that were one of a kind.

Page captured both the facts and the feeling of life in post-war New York: commuters in transit to and from their offices, the signs of commercial and consumer culture, leisure pursuits and night life, psychological vignettes of the lonely and dispossessed. His work provides a rich and original vision of 1949 America.

“Page was devoted to the visible facts of his world, but his real goal was something much deeper: the emotional tenor of life at that time and that place. This is a body of work of great passion, intelligence, and artistic integrity — one that is all the more important for having remained essentially unknown to the present day,” Davis said.

This exhibition will be accompanied by a beautifully produced 144-page book, with a total of 101 reproductions and a detailed essay by Davis on Page’s life and work. Davis will give a lecture about Page at 2 p.m., Feb. 22 in Atkins Auditorium followed by a book signing. After its debut at the Nelson-Atkins, the exhibition is expected to travel to three or four additional venues in 2009-10.

· Friday, March 20, 7–9 p.m.
Davis will lead an in-gallery discussion focusing on the works of Homer Page and his place in American photography. Participants should meet in Gallery L11.

The exhibition is supported by the Hall Family Foundation and The Judith Rothschild Foundation. Midwest Airlines is the official airline sponsor.