New Rembrandt Peale Portrait in Focus Show at the Walters Art Museum, March 4–August 23
Exhibition will explore the mystery of the sitter’s identity 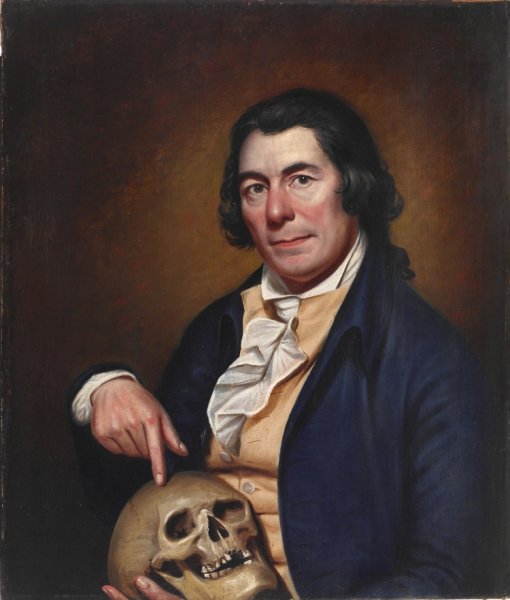 In celebration of a recent gift to the museum by a Maryland family, the Walters Art Museum presents the focus show, Rembrandt Peale’s Portrait of John Meer: A New Addition to the American Art Collection, on the work of painter Rembrandt Peale (1778–1860). The donated, undated painting, Portrait of John Meer, depicts a robust middle-aged man who points enigmatically at a human skull cradled to his body. Painted by Peale when he was probably just 17 years of age, Portrait of John Meer serves as a point of comparison with other exhibited works to trace the artist’s development from a technical wunderkind to a mature painter of remarkable fluency. Highlights within the focus show include Peale’s sensitive fraternal portrait, Rubens Peale with a Geranium, on loan to the Walters from the National Gallery of Art, Washington, D.C., as well as portraits from the Maryland Historical Society and the Historical Society of Pennsylvania Collection at Atwater Kent Museum, Philadelphia.

“This show will also explore the symbolism of the human skull in Western art and its possible significance as a clue to the profession of the sitter, who the family had always thought of as a ‘Dr.’ Meer,” said Eik Kahng, the Walters’ curator and head of the department of 18th and 19th century art.

A craftsman and friend of the Peale family, Meer emigrated from England to Philadelphia with his family in 1793. He soon lost his wife to yellow fever and nearly died of the illness himself. He survived, however, to nurse others through outbreaks of the disease that plagued the city throughout the 1790’s. Peale’s use of the skull poignantly recognizes the subject’s personal loss, his brush with death and his heroic service to others.

Symbolism of the Human Skull

In response to the prominence of the human skull in the Meer portrait, the focus show highlights the use of skull imagery in the Renaissance, Baroque and Modern periods. Giacomo Galli’s Saint Mary Magdalene, for example, pairs a smooth-skinned young woman with a rough skull as a momento mori, a stark reminder of one’s own mortality. Lucas van Leyden’s 17th-century print of a handsome courtier in fancy dress brandishing a skull was intended as a warning against pride in earthly things such as wealth or knowledge. Peale may have been thinking of compositions like van Leyden’s when he conceived of the Meer portrait. Alfred Stieglitz’s photographed “portrait” of Southwestern artist Georgia O’Keefe shows the painter’s roughhewn hands stretched alongside a horse’s skull, one of her favorite and enduring subjects.

As if to guide their destinies, the American portrait painter Charles Willson Peale (1741–1827) named his children after famous artists: Raphaelle, Angelica Kauffman, Titian, Rubens, Sofonisba Angusciola, Rosalba Carriera and Rembrandt. Charles Willson Peale himself was the leading portraitist of his day, weaving conventions from British portraiture into his works that appealed to elite clients in the Baltimore and Philadelphia areas. Rembrandt was the most naturally gifted of the siblings and was singled out by his father as the favorite. Through his father’s introduction, the young Rembrandt was given an opportunity to paint a study of the then-legendary George Washington. His direct portrayal offers viewers a startling contrast to Gilbert Stuart’s highly idealized portraits of the president, an example of which is on view in the Walters’ Neoclassicism and Romanticism gallery adjacent to the Peale exhibition.