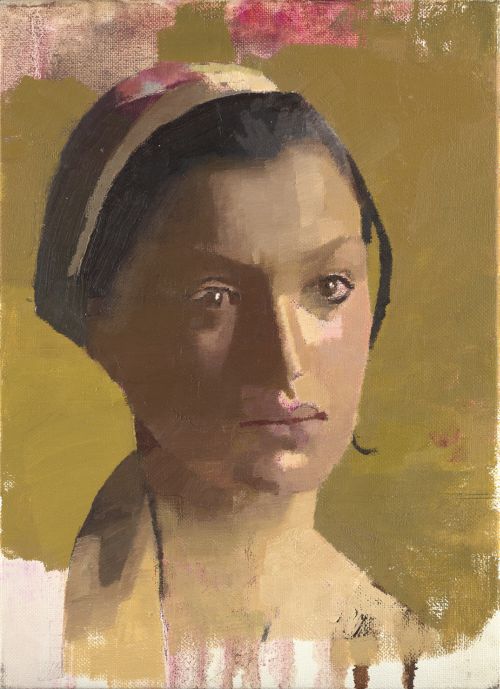 Diarmuid Kelley is a very 21st century painter who is unafraid to use traditional techniques to stunning effect. His largest body of new work for many years, some 20 paintings, will go on show at Offer Waterman & Co, 11 Langton Street, London SW10 from 12 November to 11 December 2010. The majority are portraits, which is appropriate following the recent praise of his work by one of Britain’s best-known art critics in a review of The BP Portrait Award at The National Portrait Gallery. Brian Sewell of the London Evening Standard said that Kelley offered “hope for portraiture”.

While other students at Chelsea College of Art & Design embraced conceptualism, Kelley always wanted to paint objects and the human figure. Both will be represented in his new show at Offer Waterman & Co, one of London’s leading specialists in Modern British art. The exhibition will include some of his meticulously observed still lifes as well as portraits – half a dozen of which will be large-scale works.

Kelley’s portraits demonstrate both his respect for the past and his passion for the present. Almost all his sitters are placed in a specially-constructed box which gives him the maximum possible control over light in his airy top floor studio in Chelsea. The wooden box has a window frame built into the side nearest to natural light so that the glassless panels can be left open or closed off. Similarly the front of the box can remain open or have a cloth partially draped over it. “It is a controlled interior,” says Kelley. “It is a very flexible way of using one piece of equipment. You don’t have to use a different set-up to get a different sort of light.”

The box is a device that was used by Joseph Wright of Derby, the 18th century English painter who experimented with depicting unusual effects of light, and by some Dutch artists but Kelley employs it to produce portraits that are anything but traditional. He paints friends or the latter’s friends, always looking for interesting faces and styles and attracted by a sense of timelessness. One young female sitter has a 1920s bobbed haircut and a love of vintage clothes and could be from any era. On the wall of Kelley’s studio hangs a British Army officer’s ceremonial tunic with an impressive row of medal ribbons. Only these, for campaigns including Iraq and Afghanistan, give away the fact that it is a modern uniform worn by Major Chris Palmer, who is still serving with The Light Dragoons. Palmer is not a typical cavalry officer being also a graphic designer who has had children’s books published. Kelley likes the uniform because “it gives me the chance to paint something that is still worn but which looks extremely old”.

One of Kelley’s most memorable portraits resulted from this fusion of timeless tradition with modern painting and will be included in the exhibition at Offer Waterman & Co. I Went to a Marvellous Party depicts Palmer wearing his uniform and slumped apparently exhausted. Kelley entered it in this year’s BP Portrait Award where it won Sewell’s praise in an otherwise unfavourable review of the competition in the London Evening Standard. The critic described Kelley’s work and a painting by another artist as “things of ambition and scale enough to offer hope for portraiture”.