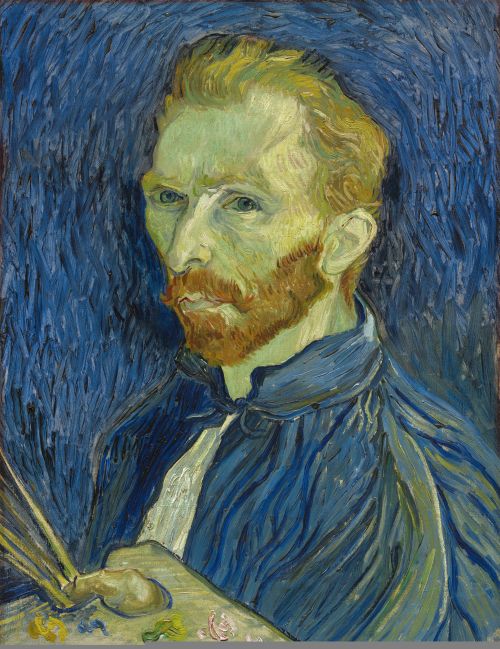 For the next several months the Norton Museum’s celebrated painting by Paul Gauguin, Christ in the Garden of Olives, 1889 (illustrated at right), will be featured in the exhibition Gauguin: Maker of Myth at the Tate Modern, London, and the National Gallery of Art, Washington, DC. In this work Gauguin portrayed himself in a tragic, iconic mode as Jesus Christ in the Garden of Gethsemane on the night of his betrayal by Judas Iscariot. In a poignant reference to his attempted artistic liaison with Vincent van Gogh, which had recently ended in a debacle, Gauguin has given himself bright orange-red hair—like that of his erstwhile colleague and friend. During much of our painting’s absence from West Palm Beach the Museum will display, instead, an almost exactly contemporaneous self-portrait by Van Gogh, likewise painted in the immediate aftermath of the contentious and aborted sojourn with Gauguin, at Arles, which lasted from October through December 1888.

Early in his career, the Dutchman Van Gogh idolized and emulated the work of French artist Jean-François Millet (1814–75), renowned painter of peasants whose existence he ennobled in works such as The Angelus, 1857–59 (illustrated at left). During Van Gogh’s formative years this picture was in multiple American collections where, thanks to repeated public exhibition, it became perhaps the most famous modern painting in the world. (A smaller but fine example of Millet’s unique style, The Faggot Gatherers, is displayed on the wall to your left.) Van Gogh arrived in Paris in March 1886; there he encountered works by contemporary artists such as Cézanne, Renoir, Seurat, and Signac which radically affected his own outlook and style. He rapidly developed the highly individual technique with which the world is now familiar, one characterized by high-key, saturated pigments thickly applied with energetic brushstrokes. Color is not always objectively realistic but is, instead, imbued with symbolic and expressive values. For these reasons his influence on the other stylistic trends of the late 19th and early 20th centuries—especially Fauvism—is incalculable.

The present Self-Portrait is one of the very last of no fewer than 36 which Van Gogh executed between his arrival in Paris and his suicide at the asylum in Saint-Rémy in July 1890. It seems to have been executed in a single sitting without later retouching. Van Gogh depicted himself at work, dressed in an artist’s smock with a palette and brushes in hand; he looks over his left shoulder (as if at the viewer) with an aspect of intense seriousness and self-scrutiny. This manner of self-presentation was anything but casual or accidental: it was, instead, a strategically calculated choice whereby Van Gogh intended to evoke and thereby suggest some affinity to the self-portraits of Rembrandt van Rijn, the greatest of all Dutch artists (see the example illustrated at right). But the haunting—indeed, the haunted—quality of Van Gogh’s picture is unforgettable. The dark blue-violet of the smock and ground, the vivid orange of his hair and beard, create a startling contrast to the yellow and green tones of his face and heighten the gauntness of his features and sallow complexion. The dynamic, even frenzied brushwork lends an uncommon immediacy and expressiveness to the Washington Self-Portrait: it is not just a record of the artist’s appearance, but a revelation of his precarious psychological state.