The Essence of Things. Design and the Art of Reduction 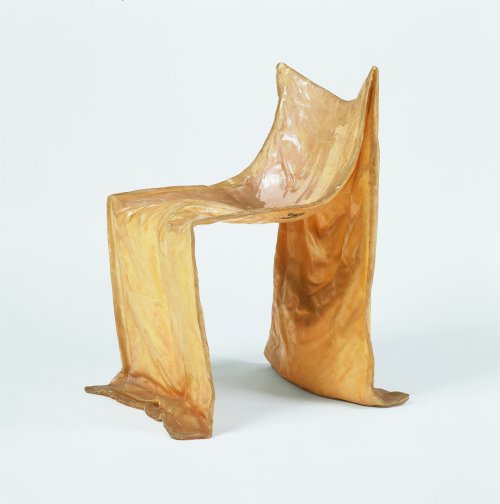 Introduction
Do financially difficult conditions automatically lead to more economical and longer-lasting products? In this current discussion, both Darwinist model of the “survival of the fittest” as well as design icons from past crisis-ridden eras are presented as arguments. Upon closer inspection of the theme, however, these comparisons tend to fall short. Throughout the ups and downs of the economy, modern design – and especially industrial design – has always endeavoured toward efficiency and a reduction of formal and functional means. The rationality of machine production inherently suggests a reduced formal vocabulary yet important impetus in this direction also came, and continues to come, from other areas such as Japanese aesthetics and the dialogue of design with abstract art.

Concept
The Vitra Design Museum traces these conditions and influences in its new exhibition and presents the high art of reduction as the quintessence of design. Divided into twelve sections grouped under the headings Manufacture, Function, Aesthetics and Ethics, the exhibition puts forth the motifs, motivations and strategies pursued by design in its quest for efficiency. The fact that Vitra Design Museum concentrates on tendencies in furniture design – though by no means exclusively – proves to be a decisive advantage, as furniture supplies this complex theme with particularly vivid arguments as a proxy for everyday culture and our attitude toward the world.
To introduce the subject matter, the exhibition kicks off with a Prologue featuring a surprising selection of everyday objects. The overview extends from a prehistoric hand axe and multipack rings for beverage cans up to a cut diamond and a Smartphone. Likewise, objects from the collection of the Swiss designer Franco Clivio provide evidence of the universal pursuit of the simplest solutions.

Group 1: Manufacture
The systematic presentation of the theme of reduction begins with economic aspects of Production. The effort and skill needed to arrive at the “simplest” solutions are documented in working models of the fibreglass chair by Charles and Ray Eames. A film by these pioneering American designers illustrates the complexity of the design and production process.
The economic interest in manufacturing a complete object from a single material and in just one step – in other words, as a Unity – is shown by a series of furniture pieces developed in different materials, either from a single two-dimensional surface or as a monoblock. As in other exhibition groups, this section shows both early and recent examples of furniture design, complemented by lighting and other interior objects.
A form of economy seldom considered in connection with design occurs in the nature of problem solving: in ingenious ideas that shorten otherwise complex and drawn-out procedures.
Good illustrations of this type of reduction can be found in the Inspiration from objects trouvés and processes in which existing objects are interpreted and used in new ways.
The industrial context makes it necessary to plan and execute products to minimize outlays for packaging, transport and storage. The significance of these Logistics – such as the manufacture and delivery in components that can be individually assembled (as modules) by the retailer or end customer – is represented by companies like Thonet and Ikea whose business philosophies have met with international success.

Group 2: Function
In a variety of different areas, design is concerned with the need to accommodate as much as possible in the smallest feasible space. The exhibited examples of Compaction range from a cleverly designed historic folding cot that looks like a precursor of the furniture in Mies van der Rohe’s Barcelona Pavilion to Le Corbusier’s multifunctional block of wood for the Fondation Franco-Brésilienne in Paris up to the modern-day laptop.
While minimum weight can be of essential and even existential importance in sports, the military and in means of transport, furniture design often adopts this maxim of Lightness as an opportunity to experiment with different materials, though these explorations – such as in garden and stackable furniture or in mass seating – are also capable of yielding thoroughly practical applications.

Group 3: Aesthetics
Since the dawn of mass production, the logic of construction and conditions of efficient fabrication have led designers to embrace right-angled forms. For modern design, Euclidean Geometry became a guiding principle, particularly in the rationality of individual production and the discovery of the stringent orthogonality in Japanese architecture and arts and crafts.
Design frequently makes use of shapes and design processes derived from nature that mediate between the functions of an object and our physical and spiritual needs. With this Abstraction, it looks for the most universally applicable solutions for users and usage.
Technical advances have spurred our imagination to try to overcome matter and perform functions solely with energy. While this has long become reality in numerous fields (especially in the media), the idea of Dissolution is expressed in furnishings meant to render physical functions, both in the economic use of increasingly efficient materials and in a fleeting visual presence.
The free-flowing transition from one area to another and between interior and exterior has been a guiding tenet of modern design going back to the early architecture of Frank Lloyd Wright. Through the omnipresent use of glass, Transparency has become a virtual synonym for the freedom of the spirit and energy, with transparent objects being perceived less as physical bodies and more through their function.
Material things always additionally function as bearers of messages and the art of their reduction consists not least in finding a lowest common denominator for these communications as well. In this way, the object becomes a Sign that at the same time ideally signals its function.

Group 4: Ethics
The need to penetrate down to the very idea of an object arises in many cases from an ethical stance. Things are to be liberated from any evidence of vain individuality and traced back to their archetypal form from the ballast of history. Yet reduction to essential properties also stems from practical motivations where it involves a strict concentration on function or where Typenmöbel (standardized unit furniture) is defined for universal use. For industrial production, the Model purged of all randomness, excess and defects is the prototype.

Exhibits
In depicting the various modes of reduction as the quintessence of design, the museum serves up many of its best objects as well as a number of surprising treasures and new acquisitions from its collection. Along with such indispensable classics as the first production model of Marcel Breuer’s “Wassily” club chair, Gerrit Rietveld’s “Roodblauwe Stoel”, a side chair from Donald Judd or Willy Guhl’s garden chair in fibre cement, the exhibition also features a pivoting prototype of Eero Saarinen’s “Tulip Chair”, little known working models from the estate of Charles and Ray Eames and Mies van der Rohe’s “Brno Chair” upholstered with parchment.
These are joined by high-calibre loans – such as a ca. 1800 folding cot from the Royal House of Hanover, a prototype of Heinz Witthoeft’s “Tail 13” armchair made from bent plastic or Mies van der Rohe’s “MR 150/3” table with a black glass top. Especially captivating is the presentation of the cheapest car in history: the new ultra-compact “Nano” produced in India, which is not yet commercially available in Europe.

Conclusion
In the wide-ranging, systematic presentation, the exhibition shows that a restriction to the essential accommodates both functional conditions and artistic trends and satisfies economic and social needs as well as elite and purely aesthetic standards. It demonstrates the defining parameters and strategies of industrial design yet also describes the exemplary function of solitaires for which high-quality materials have been meticulously crafted to render desired effects in the purest possible form. Despite all the rationalization of method and material, the concentration on functional essentials and the abstraction of shape up to the very
disappearance of things, the principle of simplicity demonstrates its great complexity. In the clarification and concentration of things – to articulate one of the exhibition’s key messages – each individual detail is thus brought to the fore.

Curator
Born in 1964, Mathias Schwartz-Clauss received a master’s degree in Art History and Philosophy at Ruhr University in Bochum and has worked for the Vitra Design Museum since 1990. As curator or co-curator, he has prepared various exhibitions that have traveled from Weil am Rhein onto other museums in Europe, the United States, Australia and Japan. They have included retrospectives on Ron Arad, Charles and Ray Eames, Frank Lloyd Wright and Jean Prouvé as well as exhibitions on Thonet, masterpieces from the Vitra Design Museum’s collection, and “Living in Motion – Design and Architecture for Flexible Dwelling”. His latest exhibition showed the private collection of Vitra Design Museum’s director Alexander von Vegesack, commissioned by Pinacoteca Agnelli in Turin, Italy. Schwartz-Clauss is a consultant for Vitra Design Museum’s summer academy in France and gives university lectures.

Catalogue
The exhibition is accompanied by a catalogue published by Vitra Design Museum Publications in both German and English. The large-format 132-page volume contains an essay written by the curator on the central theme of the exhibition, an article by the sociologist Dirk Baecker on “Omission as a Paradoxical Intervention”, a text by the art historian Martin Hartung examining “Man as the Measure of All Things?” as well as a contribution from design journalist Wiebke Lang on the “Heroes of the Everyday”. Along with text illustrations, the catalogue includes colour images of all exhibit objects and their technical specifications as well as explanatory notes on their particular relevance to the theme.