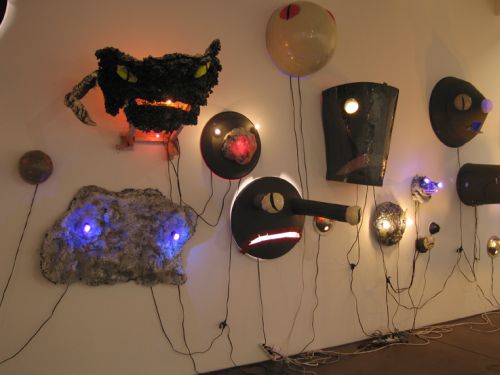 Insidious. That’s the word to describe Canadian artist Jon Pylypchuk’s works and the way they insinuate themselves, with their benign appearance initially obscuring the seriousness of the subject matter. Our unease stems from the fact that he uses items we associate with childhood (figures, puppets, dolls) to tackle such complex topics as poverty and violence. From October 8, 2010 to January 2, 2011, the Musée d’art contemporain presents Jon Pylypchuk, a survey of the recent output, from 2006 to 2009, of this multidisciplinary artist who is equally at home in painting, sculpture, installation and video.

The exhibition comprises seven major works by the artist, including The War, 2009, a remarkable installation featuring a series of masks that play, to various degrees, on the bestiary and its anthropomorphic resonance, and probe the relationship between human beings, the animal world and technology. In addition to The War, visitors will see a video from very early in Pylypchuk’s career, shut your cockface up, 1998; the major installation press a weight through life and I will watch this crush you, 2006, originally produced for the opening of the Museum of Contemporary Art, Detroit; untitled (elephant fight), in bronze, and untitled (birds), in enamel on raw clay, both from 2008; and the photograph Of Those Who Will Survive. A nice evening based on an idea by Sibylle Berg and Raphael Gygax, 2008, from a stage play for which Pylypchuk designed the sets and props, and at least i thought i would be holding you while the world collapsed/only your world is collapsing dear come in, 2009.

Born in Winnipeg in 1972, Jon Pylypchuk studied at the University of Manitoba School of Art, where he co-founded the collective known as the Royal Art Lodge in 1996 with fellow artists Michael Dumontier, Marcel Dzama, Neil Farber, Drue Langlois and Adrian Williams. Two years later, he moved to Los Angeles, where he is currently based. In the span of less than five years, he has captured international attention and now exhibits in New York, Düsseldorf, Münster, London, Los Angeles, Paris, San Francisco, Tokyo and Cleveland, among other places. His works are to be found in the collections of such prestigious institutions as the Los Angeles County Museum of Art; the Museum of Contemporary Art, Los Angeles; the Museum of Modern Art, New York; and the Whitney Museum, New York.