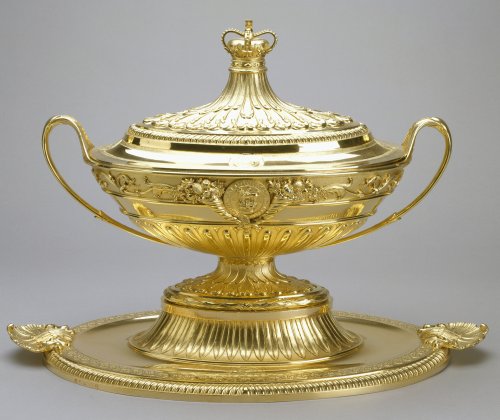 The Royal Collection, The National Trust, Lloyd’s of London, museums and private collectors have loaned important works to the first-ever exhibition devoted entirely to English neoclassical silver. The Classical Ideal: English Silver 1760-1840 will be held by Koopman Rare Art, one of the world’s leading specialist silver dealers, at their premises at 53-64 Chancery Lane, London WC2 from 3-25 June 2010. This unique exhibition will be in support of Sir John Soane’s Museum which will lend designs for silver and plate by Robert Adam, considered one of the greatest decorators of all time, from its extensive collection.

Neo-classicism in silver, furniture and ceramics dates from the second half of the 18th century and was a new idea that took the world by storm. It was both a reaction against the excesses of the rococo and an enthusiastic revival of the use of shapes and decoration from Greek and Roman architecture. Neo-classicism in English silver is a much neglected area and the exhibition catalogue by the curator Christopher Hartop will make an important scholarly contribution to research into the subject. The foreword will be written by Tim Knox, Director of Sir John Soane’s Museum, and proceeds from the sale of the catalogue will go to the museum. Koopman Rare Art and Sir John Soane’s Museum will also hold a one day conference on neo-classical metalwork in London on Saturday 19 June 2010.

One of the finest pieces in the exhibition will be the Doncaster Cup, loaned from Anglesey Abbey in Cambridgeshire by The National Trust. This neo-classical silver-gilt racing trophy was made by Daniel Smith and Robert Sharp in 1764 and was designed by Robert Adam.
The latter’s drawing for the design of the cup is among those being loaned to the exhibition by Sir John Soane’s Museum and will be displayed alongside it.

Loans from The Royal Collection will include a soup tureen and a pair of sauce boats from a silver-gilt dinner service commissioned from the Royal Goldsmith Thomas Heming in 1789-90, probably to commemorate George III’s recovery from illness. Another Thomas Heming work loaned by The Royal Collection is a silver-gilt tea urn, dating from 1768-69, engraved with the cipher of Queen Charlotte, George III’s consort. Five years ago Koopman Rare Art mounted another important loan exhibition devoted to Rundell & Bridge, the Royal Goldsmiths to George III and George IV, so it is appropriate that The Royal Collection is loaning a silvergilt candelabrum made by John Bridge in 1828-29 to The Classical Ideal: English Silver 1760-1840.

The Akzo Nobel Collection at the Courtauld Institute of Art is lending a George III silver cup and cover made in London 1770-71 by Louisa and George Courtauld while a three-light candelabrum will come from Lloyd’s of London. This 1774-75 piece by John Carter was designed by Robert Adam for Sir Watkin Williams-Wynn, a Welsh MP and landowner who was a major patron of the arts. Another seminal piece of Adam design in the exhibition will be a candlestick loaned by Manchester Art Gallery which, like the Doncaster Cup, will be displayed alongside the original drawing from Sir John Soane’s Museum. A pair of George III silver ewers thought to have been designed by James Wyatt will be lent by Temple Newsam in Leeds, one of England’s great historic estates. Twelve items will be loaned by the Victoria & Albert Museum in London, including pieces from the celebrated silver collection formed by the late Sir Arthur Gilbert of Beverly Hills, which has recently been acquired by the museum.

Among other important items will be a pair of silver-gilt candlesticks made for the eccentric arts patron and collector William Beckford by Charles Aldridge in London in 1787–88 and a pair of George III sauce tureens probably designed by James Wyatt and made in Birmingham in 1773-74 by Matthew Boulton and John Fothergill. Loaned from a private collection in North America, these tureens formed part of a dinner service supplied by Boulton and Fothergill to Charles Vere, a landowner, whose coat of arms is engraved on the side. Another magnificent example of English neo-classical silver in the exhibition will be a silver-gilt teapot made in
London in 1785-86 by Andrew Fogelberg and Stephen Gilbert.

Koopman Rare Art will hold a simultaneous selling exhibition for the duration of The Classical Ideal: English Silver 1760-1840. The two events will be held in separate galleries in the same building.