Dance Machines – From Léger to Kraftwerk at Moderna Museet

Moderna Museet opens its 2014 art season with the exhibition Dance Machines – From Léger to Kraftwerk. The exhibition focuses on the modernists’ fascination with the machine and mechanised everyday life, and how Kraftwerk has explored the relationship between man and machine in multidisciplinary projects. Dance Machines – From Léger to Kraftwerk opens on 22 January. 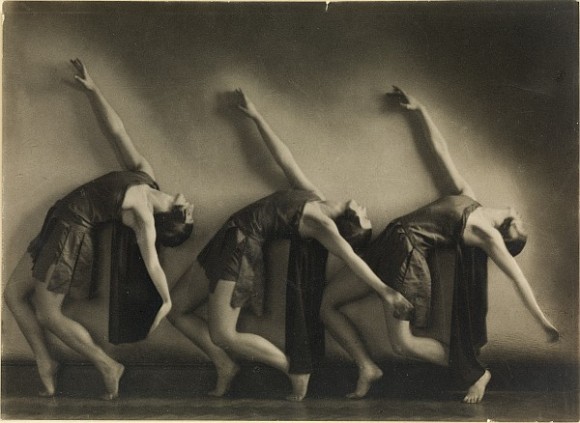 In the first decades of the 20th century, industrialised, mechanised society made inroads into art and everyday life. The Italian futurists proclaimed a new era, with the industrial sector and its machines as an aesthetic ideal. In Paris, the hub of European avant-garde, the artists Fernand Léger (1881-1955) and Sonia Delaunay-Terk (1885-1979), and the poets Blaise Cendrars (1887-1961) and Guillaume Apollinaire (1880-1918) were among the first to use modernity – and the modern city – as their subject matter. As in Aleksandra Ekster’s (1882-1949) fragmented landscape Venezia (1915), where she celebrates the beauty of the city’s contrasts and reflections. During this innovative era, film, choreography and dance became essential to portraying movement, energy and dynamism. The stage became a laboratory for combining the arts across disciplinary boundaries in wild aesthetic experiments. The dance company of Rolf de Maré (1888-1964), Ballets Suédois, and Sergei Diaghilev’s (1872-1929) Ballets Russes attracted the most advanced artists and produced groundbreaking performances to furiously modern music.

At the time of the First World War, artists had renounced academic traditionalism and sought a new realism based on principles of organisation, structure and rhythm. The machine became a modernist icon, and anonymous engineers were looked upon as the true artists. Gradually, industrial rationalism and experiences from the war gave rise to notions of the body as a soulless engine. In fragmented collages and paintings based on instruction manuals, Francis Picabia (1879-1953), Marcel Duchamp (1887-1968) and Gösta Adrian-Nilsson (1884-1965) portrayed bodies reduced to machine-like objects.

Kraftwerk founders and electro pioneers Ralf Hütter and Florian Schneider have been creating futuristic electro music since 1970 at their Kling Klang Studio in Düsseldorf, Germany using synthetic sounds and voices, minimalist speech singing and lyrics with monotonous industrial rhythms. With the robot as their artistic alter ego and the 3-D visuals of their performances, they have explored the relationship between man and machine in multidisciplinary projects.

“Where the early avant-garde wanted to create a new art for a rapidly changing new society, Kraftwerk produced the soundtrack for the 21st century and our digitalised contemporary world,” says curator Jo Widoff.

The exhibition Dance Machines – From Léger to Kraftwerk presents some 50 works from the Moderna Museet Collection together with seminal works on loan from other institutions, including Dansmuseet in Stockholm and Centre Pompidou in Paris. The exhibition includes paintings, photography, drawings and moving images from 1911 to 1934, along with unique photogravures from 1887 by Eadweard Muybridge (1830-1904). Dance Machines also features works by artists such as Giacomo Balla (1871-1958), Aleksandra Ekster, Viking Eggeling (1880-1925), Fernand Léger and Francis Picabia.

No Country: Contemporary Art for South and Southeast Asia Rirkrit Tiravanija at The Modern Art Museum of Fort Worth