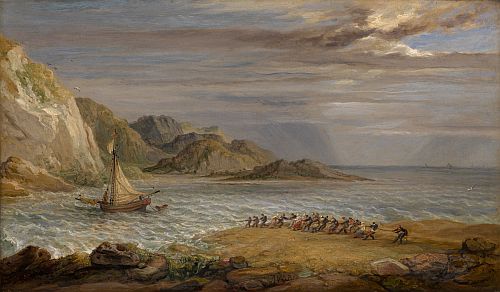 A remarkable exhibition of works by James Ward, a major painter and print-maker in Regency Britain, is to be held by Lowell Libson Ltd, one of the world’s leading dealers in the finest British pictures, sculpture and works on paper. Breadth and Quality: Oil Studies, Watercolours and Drawings by James Ward RA will take place from 28 June to 12 July 2013 at 3 Clifford Street, London W1 and will be part of London Art Week, a new initiative providing a platform for paintings, drawings and sculpture.
James Ward (1769-1859) was famed for his landscapes and historical and animal paintings but, although critically acclaimed by his contemporaries, his name is not as well-known now as it should be. Lowell Libson Ltd has assembled an unprecedented group of some 20 oil sketches and more than 60 drawings illuminating every aspect of his career and working method. The exhibition will be part of the first-ever London Art Week, which will run from 28 June to 5 July 2013 but will remain on show for a further week until 12 July. All the works will be for sale with prices ranging from about £150 to £20,000.
Ward was a brilliant, intuitive draughtsman who trained as an engraver with the English painter and mezzotint engraver John Raphael Smith (1752 – 1812) before embarking on a career as a painter. Throughout his life he made meticulous preparations for each of his major compositions and the exhibition at Lowell Libson Ltd will include examples of this such as the oil on canvas work The Pool of Bethesda and the drawing Study for an angel for the Pool of Bethesda, both depicting the scene at the pool where Christ healed the sick. Also in the exhibition will be an archive of studies that Ward made of 17th century arms and armour as well as his spirited compositional studies made in preparation for his ambitious historical canvases. Ward’s fascination with landscape is represented by a number of highly finished views as well as compositional studies of English, Scottish and Welsh scenes.
The show will include works in oil, pencil, pen and ink and watercolour, which will demonstrate Ward’s versatility as a technician as well as his breadth of interest as an artist. It offers an exciting opportunity to re-examine the career of this important European master of the early 19th century as well as providing collectors with an opportunity to acquire characteristic examples of his work. There will be a fully illustrated catalogue with an introduction by Loyd Grossman, the television presenter, gastronome and musician.
London Art Week is an exciting joint venture that unites Master Paintings Week and Master Drawings and Sculpture Week (formerly Master Drawings London). The new collaboration will provide a coherent platform, sharing advertising and creating a new online portal through which the individual websites can be accessed. London Art Week will also produce a map with the locations of all the participants making it easier for collectors to navigate the week. More than 50 specialist dealers across the fine art disciplines and the major London auction houses will take part in this new
initiative.