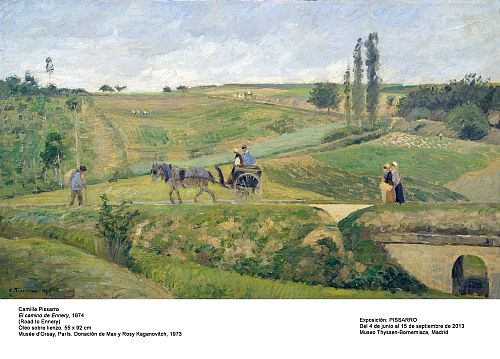 The Museo Thyssen-Bornemisza is presenting the first monographic exhibition in Spain on the Impressionist painter Camille Pissarro (1830-1903). The exhibition brings together 80 works loaned from numerous museums and collections world-wide and focuses on the Landscape, the prevailing genre within Pissarro’s oeuvre, following a chronological journey through the different places in which the artist lived and worked.

Curated by Guillermo Solana with Paula Luengo as technical curator and produced by the staff of the Museo Thyssen-Bornemisza, this exhibition will firstly be shown in Madrid, from 4 June to 15 September, after which it opens on 15 October at the CaixaForum in Barcelona.

It was Pissarro who, in 1873, wrote the statutes of the artists’ group that was about to launch its group exhibitions. He was also the only artist of the group to take part in all eight exhibitions between 1874 and 1886. However, Pissarro’s career would be overshadowed by the resounding success of his friend and fellow Impressionist Claude Monet. The present exhibition sets out to restore his reputation, not just as the “first Impressionist” but also as the master of the pioneers of modern art.