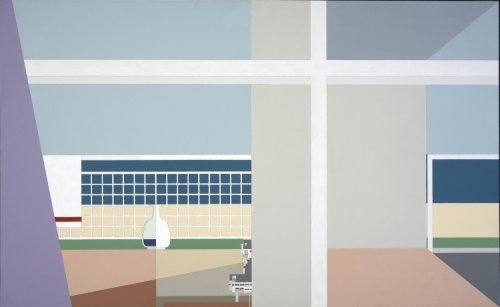 The High Museum of Art will host an exhibition of twenty-six paintings, eight architectural models and one dinnerware set by nationally recognized Atlanta-based architect Anthony Ames. The exhibition will showcase pieces from nearly three decades of work, beginning in 1980, and examine Ames’s role as a Late Modernist architect. “Anthony Ames, Architect: Residential Landscapes” will be on view at the High from April 11 through August 23, 2009. The exhibition will coincide with Modern Atlanta 2009 (May 12 through 17, 2009), during which Ames will hold a lecture at the High on Thursday, May 14, at 6:30 p.m.

“This exhibition demonstrates the depth of talent by one of Atlanta’s most important residential architects,” said Ronald T. Labaco, Curator of Decorative Arts and Design at the High. “Ames has acknowledged that his work is evocative of Richard Meier, so the installation of this exhibition in the High’s Stent Wing enhances this connection. The works on display are intellectual conceits, investigations into his ideas on architecture and urban design, and tools in the creation of form, space and order. We are honored to present this body of work and provide our visitors with a fascinating look into Ames’s world of residential architecture, painting and design.”

The paintings in the exhibition—inspired by Le Corbusier, Ozenfant and Gerald Murphy—showcase Ames’s interest in the two-dimensional depiction of three-dimensional space, decorative patterns, color relationships and narrative references. He often incorporates his paintings into the interiors of his finished residences, many as murals.

The eight architectural models on display reflect Ames’s interest in the construction of three-dimensional form and space, as well as the influence of the architectural designs of Le Corbusier, Giuseppe Terragni and Richard Meier. Ames uses, reuses and transforms ideas borrowed from these architects, reassembling them with a distinctive vision. As he has written, “The form of these houses is never novel in the sense they claim to be pure invention. . . . It is not novelty that interests me, but rather the piece thievery and the trail of evidence that it leaves behind.”

The modernist design of the dinnerware set from the High’s collection was inspired by purist “object-types” such as bottle, pitcher, plate and egg. The set was created by Ames for the Swid Powell series of dinnerware by prestigious architects. The series also included Michael Graves, Frank Gehry and Richard Powell, among others. Visitors will be able to recognize the dinnerware forms as two-dimensional representative shapes in the adjacent paintings on display.
Anthony Ames
For more than thirty years Anthony Ames’s geometric white residences have been a modern alternative to the prevailing tradition of historicist architecture in Atlanta and elsewhere. Ames is best known for Hulse House in Ansley Park (1984), and his local public commissions include the Orientation Center for the Atlanta Botanical Garden (1984) and the Fulton County Library in Alpharetta (1986). Ames has maintained a small private architectural practice since 1974. A graduate of both the Georgia Institute of Technology and Harvard University, he was awarded the Rome Prize in Architecture in 1983, and has taught at eleven colleges and universities. His work has been widely published and recognized through numerous honors, including the Architectural Record House Award for Hulse Pavilion in 1978 and the Progressive Architecture Design Citation for Garden Pavilion in 1982. He is a Fellow of the American Institute of Architects and of the American Academy in Rome. Two monographs have been published on his work: “Five Houses” and “Residential Work Volume 2.”

Exhibition Organization and Support
“Anthony Ames, Architect: Residential Landscapes” was organized by the High Museum of Art and curated by Ron Labaco, the High’s Curator of Decorative Art and Design.