The Avant-Gardes of Abstraction

Peggy and Solomon R. Guggenheim: The Avant-Gardes of Abstraction
Church of San Marco
February 20 – May 30, 2010 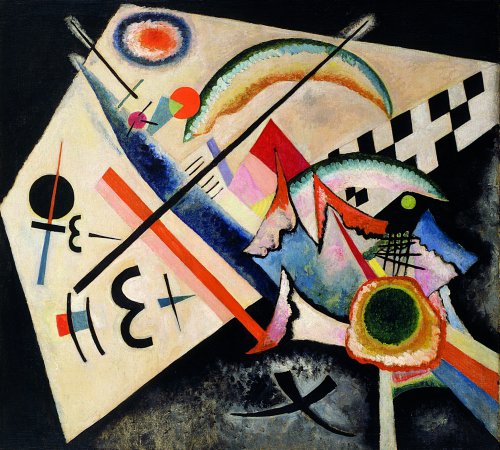 The exhibition Peggy and Solomon R. Guggenheim: The Avant-Gardes of Abstraction opens to the public on 20 February 2010, in the Arca exhibition space in the former Church of San Marco, Vercelli. The exhibition is organized by the Piedmont Region, the Municipality of Vercelli, and the Peggy Guggenheim Collection, Venice.
Curated by Luca Massimo Barbero, this is the third in a trio of exhibitions beginning in 2007 which have brought more than 80,000 visitors to Vercelli over the past two years. Visitors have admired historic masterpieces of the twentieth century, the majority belonging to the Peggy Guggenheim Collection, representing her personal vision for her museum. The first exhibition, which focused on Surrealism, was prompted by Peggy’s own words: “[In 1942] I wore one of Tanguy’s earrings and one of Calder’s, in order to demonstrate my impartiality between Surrealist and Abstract art.” Taking the symbolic gesture once more as a point of departure, and focusing attention this time on the other earring, this forthcoming exhibition adds the dimension of Solomon R. Guggenheim’s separate collecting achievement, revealing his passion for abstraction (and that of Hilla Rebay, his first museum director), as well as Peggy’s: from the early avant-garde to Abstract Expressionism and the European Informel.

Peggy and Solomon R. Guggenheim: The Avant-Gardes of Abstraction presents to the European public for the first time the theme of abstraction in the form of a dialogue between uncle and niece. It traces a path through the exchanges and acquisitions of the two collectors, confirming Solomon and Peggy’s places among the major figures of 20th century art history.
In 1939 Solomon R. Guggenheim established the Museum of Non-Objective Painting in New York. This museum was based on the idea of pure abstraction as the absence of the figurative, whereas Peggy also turned to a more “transgressive” modernism, that of Surrealism, without however neglecting to acquire masterpieces of the abstract avant-gardes for her collection and postwar examples of the new abstraction of and Abstract Expressionism and beyond.
The show includes over 50 paintings, the majority from the Solomon R. Guggenheim Museum, New York, by such artists as Paul Cézanne, Georges Seurat, Georges Braque, Henri Matisse, Robert Delaunay, Jean Arp, Jean Dubuffet, Pierre Soulages, Adolph Gottlieb as well as by Italian artists befriended by Peggy Guggenheim such as Edmondo Bacci, Giuseppe Santomaso, Tancredi Parmeggiani and Emilio Vedova (with a major work loaned by the Emilio and Anna Bianca Vedova Foundation, Venice). Two pioneering masters central to the pictorial language of abstraction in the 20th century, each represented with several works in this exhibition, were Vasily Kandinsky and Piet Mondrian.
The show benefits from the partnership of Giunti Arte mostre musei, which, in addition to publishing the catalogue, is planning a promotional and educational program. The catalogue includes essays by Luca Massimo Barbero, Associate Curator, Peggy Guggenheim Collection, Tracey Bashkoff, Curator of Collections and Exhibitions, Solomon R. Guggenheim Museum, New York, and Philip Rylands, Director, Peggy Guggenheim Collection.