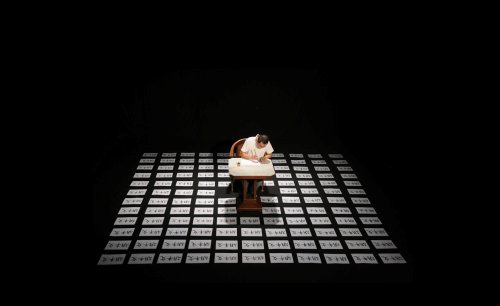 The Singapore Art Museum (SAM), as part of its initative to support the development of living artists in Singapore and the region, will officially open its first of four solo exhibitions for the year – FX Harsono: Testimonies tomorrow. Considered one of Indonesia’s foremost contemporary artists, this exhibition marks the first time that a survey of Harsono’s artwork, created between 1975 till as recently as 2009, will be presented.

Harsono, known for playing a pivotal role in the development of contemporary art in Indonesia, continues to be actively involved in the art scene up till today. FX Harsono: Testimonies traces the shifts in the artist’s strategies of representation: from the ground-breaking conceptual works that re-defined art making during the Gerakan Seni Rupa Baru (New Art Movement) of the 1970s; to the politically-charged installations of
the 1990s; to the artist’s recent investigations into issues of self, identity and personal histories. Visitors to the exhibition will witness the transition from Harsono’s earlier political works that critique the regime of power and oppression in Indonesia, to the more personal pieces of post-1998 where Harsono began to look inward and examine the position of minorities and disenfranchised in Indonesia. His most recent body of
works draws on his family history, in an investigative journey that reveals the intersection of the personal with the political.

Included in this survey are seminal works drawn from the Singapore Art Museum’s permanent collection, as well as from other art institutions and private collections, such as Paling Top ‘75 (1975) and Voice Without A Voice (1994). Through these various ‘testimonies’, the exhibition offers a glimpse of the political, social and cultural changes that have shaped Indonesian society from the artist’s point of view, and the artist’s constant re-evaluation and re-positioning of his role throughout this recent history.

Mr. Tan Boon Hui, Director of SAM, says, “We are very excited to be presenting the work of FX Harsono, an artist we deeply respect and admire. At SAM, we want to not only promote emerging artists but also acknowledge and pay tribute to artistic figures in mid-career who have contributed to the region’s contemporary arts scene. A solo exhibition of Harsono’s work was the perfect platform for us to do this and leads the way for three other solo exhibitions which SAM will be holding this year.”

Mr. Francois Monnet, Head of Private Banking, Southeast Asia and Australasia, Credit Suisse, says, “Credit Suisse is delighted to be sponsoring the first comprehensive exhibition of FX Harsono’s work at SAM. This sponsorship is part of the Bank’s longterm support of SAM under its banner of the Credit Suisse Innovation in Art series since 2007. Sponsorship of the arts and culture has a long tradition at Credit Suisse and is of prime importance as an integral part of the Bank’s corporate philosophy.
Visual arts is one of our key sponsorship focuses and we are pleased to be involved in the celebration of such an established artist like Harsono.”

To contextualise Harsono’s work and further explain the intention behind his pieces, a series of tours by the exhibitions’ curators as well as an opportunity to meet the artist himself, have been organised by SAM.