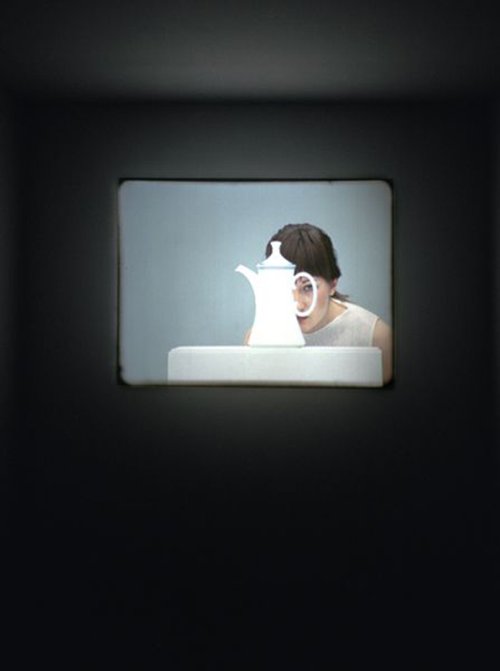 Through her works, Islam pursues an investigation of the history of experimental film, doing away with narrative structures and representations in favour of visual explorations. The Montréal presentation focuses on the artist’s fascination with cinema as a device. It consists of five 16-mm film installations produced over the last six years, including a 2010 work commissioned by the two presenting museums. Titled Magical Consciousness, this silent film simultaneously conceals and reveals a screen-actually, a Japanese screen covered in gold leaf. Filmed in black and white, the gold turns to silver (the “silver screen” also being a metaphor for cinema in general) and the screen becomes something of a reflector of an imagined consciousness that is counter to any depicted narrative.

In Assault, 2008, a man is filmed in close-up, facing the camera, lit by high-intensity projectors and in different saturated colours. Untitled, 20082009, offers a succession of close-ups against a blurred photograph. With The House Belongs to Those Who Inhabit It, 2008, Islam experiments with “writing with the camera” as she looks at graffiti used by squatters who appropriate a site by signing this slogan. Finally, in Be The First To See What You See As You See It, 2004, she follows a woman walking through an exhibition gallery who runs her eye (and then her hand, until she knocks everything to the floor) over a china tea service. In this work, the artist uses slow motion to examine the relationship between art, the gallery and the spectator.