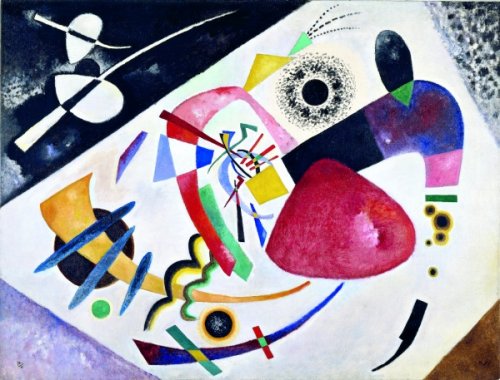 [ad#lb]
Kandinsky, a full-scale retrospective of the paintings of Vasily Kandinsky—the visionary artist, theorist, and pioneer of abstraction—will be presented at the Solomon R. Guggenheim Museum from September 18, 2009, through January 13, 2010. This comprehensive survey comprising nearly 100 of Kandinsky’s most important canvases from 1907 to 1942 is drawn primarily from the three largest repositories of the artist’s work—the Centre Pompidou in Paris, the Solomon R. Guggenheim Foundation in New York, and the Städtische Galerie im Lenbachhaus und Kunstbau in Munich—as well as from significant private and public collections. Complemented by more than 60 works on paper from the collections of the Guggenheim and Hilla von Rebay foundations, this retrospective traces the painter’s oeuvre, focusing on the key events that informed his life and work. Marked by two world wars and the Russian revolutions, Kandinsky’s abstraction did not develop in detachment or isolation. Kandinsky, the first comprehensive retrospective of the artist’s career in the United States since the three surveys mounted by the Guggenheim Museum in the 1980’s, reveals the complex background to his aesthetic innovations.

This exhibition is organized by the Solomon R. Guggenheim Foundation, New York, in cooperation with the Städtische Galerie im Lenbachhaus und Kunstbau, Munich, and the Centre Pompidou, Paris.

Generous support is provided by a grant from the National Endowment for the Arts. This exhibition is supported by an indemnity from the Federal Council on the Arts and the Humanities.

The Guggenheim Museum gratefully acknowledges the Leadership Committee for Kandinsky.

The exhibition was shown earlier this year at the Städtische Galerie im Lenbachhaus und Kunstbau, Munich and the Musée national d’art moderne, Centre Pompidou, Paris before its presentation at the Solomon R. Guggenheim Museum, New York.

The unprecedented collaborative efforts of the Guggenheim, Pompidou, and Lenbachhaus have allowed this exhibition to include examples from Kandinsky’s Improvisations, Impressions, and Compositions series, and to demonstrate the artist’s formal and conceptual contributions to the course of abstraction in the 20th-century. Kandinsky will feature works that have rarely traveled, such as the Lenbachhaus’s early masterpiece Colorful Life (Motley Life) (Das bunte Leben, 1907), and the Guggenheim Museum’s Light Picture (Helles Bild, December 1913)—a seminal work among the first of Kandinsky’s truly abstract canvases that has not been exhibited in the museum’s own galleries since the 1970s—offering new contexts and comparisons for all the works.

Under the care and preparation of the Guggenheim’s conservation department, three canvases considered extremely delicate due to the artist’s use of sand as well as paint, traveled for the first time in decades to the other venues. Significant loans from institutions such as Nizhny Novgorod State Art Museum and the State Tretyakov Gallery in Russia, as well as the Georgian National Museum, Tbilisi, will introduce works rarely or never seen in the United States.

The survey traces Kandinsky’s thematic motifs, such as the horse and rider, mountainous landscapes, tumultuous seascapes, apocalyptic imagery, and other sacred subject-matter references, and follows the artist’s painted realizations of his well-developed aesthetic theories, allowing a reexamination of the geographical- and time-based periods traditionally applied to his oeuvre.

Kandinsky and Solomon R. Guggenheim
Kandinsky was a central figure in the history and genesis of the Guggenheim Museum, and this landmark exhibition fittingly coincides with the museum’s 50th anniversary year. The museum’s founder, Solomon R. Guggenheim, started acquiring works by Kandinsky in 1929 upon the counsel of Hilla Rebay, who was to become the museum’s first director and who advocated collecting works by Kandinsky in all mediums and from all periods. Guggenheim paid an historic visit to the artist’s studio at the Bauhaus in Dessau, Germany, in 1930, and over the course of his lifetime ultimately purchased more than 150 Kandinsky paintings. Guggenheim soon became the champion of a particular brand of abstraction known as nonobjective art, which had no ties to the empirical world and aspired to spiritual and utopian goals. His enthusiasm eventually led to the opening of the Museum of Non-Objective Painting in 1939, the direct precursor of the Solomon R. Guggenheim Museum. Permanent galleries were devoted to Kandinsky from the museum’s inception, a practice the Guggenheim Museum has revived in recent years. In 1945, shortly after the artist’s death in Paris, Rebay organized a memorial exhibition at the museum and translated some of his influential writings into English.

About Kandinsky
Vasily Kandinsky (b. 1866, Moscow; d. 1944, Paris) was one of the pioneers of abstraction and great theorists of modernism. He was born in Moscow to an affluent family and initially studied law and economics at Moscow University, but at age 30 he left Russia to study painting in Munich. With his companion, artist Gabriele Münter, he traveled throughout Europe, spending time in Amsterdam, Palermo, Rome, Vienna, and other cities, as well as Carthage and Kairouan in Tunisia. In 1906, he and Münter settled briefly in Paris, returning in 1908 to Munich where Kandinsky began a period of intense activity—painting and organizing artistic associations and exhibitions.

Kandinsky published his first major theoretical writing Über das Geistige in der Kunst. Insbesondere in der Malerei (On the Spiritual in Art: And Painting in Particular), in December 1911 (dated 1912). In it he explores connections between theosophical thought and form and color in painting, considers the potential of music to express inner feelings and ideas, and identifies three types of paintings designated by titles associated with music: Impressions, which are based on real-life subjects; Improvisations, which are spontaneous and unconscious images from the artist’s inner life; and Compositions, which are formally developed works often preceded by a series of studies. Stimulated by contact from vanguard musicians and artists, including Arnold Schönberg and Franz Marc, Kandinsky painted prolifically, gradually leaving figuration behind. The outbreak of war brought an abrupt end to this highly creative period, as he was forced to leave Germany and return to Moscow in 1914. After the Russian Revolution, he worked alongside Kazimir Malevich, Liubov Popova, Alexander Rodchenko, Vladimir Tatlin, and other Suprematist and Constructivist artists, though he opposed the geometry of their “pure” painting. In 1921, he returned to Germany with his wife Nina.

In 1922, Kandinsky accepts an offer from architect Walter Gropius to teach at the Bauhaus, a school of art, architecture, and design in Weimar dedicated to establishing a modern aesthetic. While teaching the Preliminary Course and Wall Painting Workshop, Kandinsky reconnected with Paul Klee, an artist with whom he shared ideas regarding the correlation between the spiritual and art. His painting was also influenced by the rationalist inclinations of the Bauhaus and the systematization of ideas he then imposed on his own teaching. His formal vocabulary and palette simplified as he explored compositions based on geometry. Kandinsky completed his second aesthetic treatise Punkt und Linie zu Fläche. Beitrag zur Analyse der malerischen Elemente (Point and Line to Plane: A Contribution to the Analysis of Pictorial Elements) in 1926. The Nazis forced the Bauhaus to close in 1933 and the rise of National Socialism led Kandinsky to abandon Germany a second time.

In January 1934, Kandinsky and his wife Nina (whom he married in 1917) settled in a suburb of Paris. Despite a certain degree of isolation, Kandinsky succeeded in showing his work and connecting with a younger generation of artists. At a time when German authorities confiscated his work and declared it “degenerate art,” Kandinsky exhibited in Paris and continued to cultivate an American audience through his connections with Catherine Dreier, Hilla Rebay, Galka Sheyer, and other collectors. His formal vocabulary changed, featuring a softer palette and biomorphic forms, informed by his contact with artists Joan Miró and Jean Arp, Surrealism in general, and his interest in the natural sciences. After 1942, Kandinsky, restricted by a shortage of canvas, continued to create small paintings and works on paper. He died at home in 1944.

Catalogue
An illustrated 320-page catalogue accompanies the exhibition, and contains five comprehensive art historical texts and a conservation study of Kandinsky’s work. The contributors to the catalogue are Vivian Endicott Barnett, art historian and Kandinsky scholar; Tracey Bashkoff, Curator of Collections and Exhibitions at the Solomon R. Guggenheim Museum; Christian Derouet, Curator at the Musée national d’art moderne, Centre Pompidou, Paris; Matthias Haldemann, Director, Kunsthaus Zug, Switzerland; Annegret Hoberg, Curator at the Städtische Galerie im Lenbachhaus, Munich; and Gillian McMillan, Senior Conservator, Collections, at the Solomon R. Guggenheim Museum. The catalogue also features an extensive illustrated chronology compiled by Hoberg, as well as a selected bibliography. Priced at $55 for the hardcover and $35 for the softcover, the exhibition catalogue Kandinsky can be purchased at the Guggenheim Store or at the Online Store at guggenheimstore.org.

A full schedule of educational programs is being presented under the auspices of the Sackler Center for Arts Education during the run of Kandinsky. For updated information regarding ticketed programs, contact the Box Office at 212 423 3587 or visit guggenheim.org/education.

On View at the Sackler Center for Arts Education

Gabriele Münter and Vasily Kandinsky, 1902–14: A Life in Photographs
September 18, 2009–January 13, 2010
Gabriele Münter and Vasily Kandinsky, 1902–14: A Life in Photographs presents German artist Gabriele Münter’s photographs (along with a selection taken by her companion Kandinsky) recording the years they lived, traveled, and worked together between 1902 and 1914. Through her camera’s lens, Münter captured private moments in Kandinsky’s and her studio in Munich, the garden of their house in Murnau, Germany, and their travels through Europe and northern Africa, as well as collective portraits taken with colleagues and friends, including the artists of Der Blaue Reiter (The Blue Rider) at the time of their first group exhibition of 1911–12. These documentary images offer a fascinating glimpse into Münter’s and Kandinsky’s personal and public activities.

Film Program
The Guggenheim will screen a short film by interactive filmmaker and artist Grahame Weinbren. Kandinsky: A Close Look is the result of the Guggenheim Museum’s 2007 Public & Artist Interaction, a close collaboration between the Curatorial and Education Departments. Weinbren’s film explores Kandinsky’s groundbreaking theoretical writings on abstraction, color theory, and synesthesia by focusing on three significant 1913 paintings by Kandinsky in the Guggenheim Museum’s collection. The film, which is divided into three parts, will be shown on Fridays in the Museum’s New Media Theater located in the Sackler Center. Kandinsky: A Close Look explores how an artistic interpretation can provide viewers with a visual experience that can help to develop their own seeing and critical apparatuses to become more informed and engaged viewers.

22nd Annual Hilla Rebay Lecture
Kandinsky’s Apocalyptic Vision
WED, OCT 14, 6:30 pm
Reinhold Heller, Professor Emeritus, Art History and Germanic Studies, University of Chicago
In the key years around 1910 when Kandinsky was pioneering abstraction, the artist’s writings and art were shaped by a fascination with the apocalypse. This lecture weighs the intriguing fusion of a chiliastic destruction and an emergent utopian future that characterizes Kandinsky’s thought and art. Tickets are free and will be available on the day of the lecture on a first-come, first-served basis.

Fall Family Day
SUN, NOV 22, 2–5 pm
Fall Family Day celebrates the museum’s architecture and the artworks of Kandinsky. Families engage in conversations, art-making activities, performances, and storytelling. The program is recommended for children ages 4–10, but all are welcome. No reservations are needed. $15 per family; $10 members; Free for Family Members, Cool Culture, and Guggenheim partner schools.

WORKS & PROCESS AT THE GUGGENHEIM

The Blue Rider In Performance
New Commission
WED, SEPT 23, AND FRI, SEPT 25, 8 pm
Miller Theatre, Columbia University, 116th St and Broadway
Tickets available only at the Miller Theatre Box Office 212 854 7799 or millertheatre.com.
Kandinsky’s Der Blaue Reiter (The Blue Rider Almanac) of 1912 brought together art, music, and writing from avant-garde movements across Europe, capturing a short-lived moment of international experimentalism that was abruptly halted by the outbreak of World War I. Drawing upon the Blue Rider Almanac, this production explores the dynamic interaction of music, light, and visual imagery rooted in Kandinsky’s connections to artists in Russia and Germany. Pianist Sarah Rothenberg and soprano Susan Narucki perform music from the era with light projections. The Brentano String Quartet will perform Schönberg’s groundbreaking Second String Quartet, a movement of which will be brought to life by Armitage Gone! Dance.