From February 5 to April 27, 2016, the Solomon R. Guggenheim Museum presents Peter Fischli David Weiss: How to Work Better, the first comprehensive survey in a New York museum of the remarkable 33-year artistic partnership between Peter Fischli (b. 1952) and David Weiss (1946–2012). Gathering more than three hundred sculptures, photographs, slide projections, and videos, the presentation encapsulates and culminates the dynamic collaboration between the Swiss artists, bringing into focus the generative and incisive dialogue they sustained over the course of their joint career. Through its simultaneously witty and profound appropriation of cultural genres—from low-budget Hollywood flicks and picture-postcard views to the art historical trope of the readymade and the kind of amateur philosophy found in self-help books—the work continues to probe our grasp of reality and offer a deceptively casual meditation on how we perceive everyday life. As contemporary alchemists, Fischli and Weiss transformed the ordinary into something decisively not.

Unfolding along the museum’s spiraling ramps and into one Tower gallery, the exhibition departs from a traditional retrospective’s chronological format. Instead, select bodies of work appear in dialogues that span the breadth of Fischli and Weiss’s collaboration. In this way, the presentation highlights compelling connections among different series and underscores the conceptual coherence of the artists’ multiform practice. The exhibition also focuses on the centrality of film and video to Fischli and Weiss’s practice, with photographs, sculptures, and installations placed alongside moving-image works in order to represent the full scope of their oeuvre.

Throughout the course of their partnership, Fischli and Weiss probed the idea of dualistic thinking. Perhaps because they were a team of two involved in constant dialogue and debate, they consistently interrogated Western culture’s reliance on contraries. In one way or another, everything they produced together playfully unravels what the artists understood to be “popular opposites”—labor versus leisure, fiction versus reality, kitsch versus beauty, and the banal versus the sublime. Through their sustained investigation into the everyday, Fischli and Weiss undid false dichotomies with the conviction that bewilderment might be a desirable state. The artists embodied this approach in their alter egos, Rat and Bear, who, for all their differences (rats being ugly and ubiquitous while pandas are lovable and endangered), appear as equal partners in their various misadventures. Rat and Bear surface throughout Fischli and Weiss’s work in a range of forms, including appearances in the early films The Least Resistance (1980–81) and The Right Way (1983); as “authors” of the artists’ book Order and Cleanliness (1981); and as a sculpture, Rat and Bear (Sleeping) (2008).

Never ones to issue statements or dictate meaning, Fischli and Weiss avoided the authoritative voice of the artist and acted instead as whimsical philosophers who pondered all questions, great and small. No inquiry was too extraordinary or too trivial, whether metaphysical or empirical, as evinced by works such as Large Question Pot (1984) and the series Question Projections (2000–2003), which features phrases both fanciful (“Is it true that traces of aliens have been found in yogurt?”) and serious (“Is everything meaningless?”). The artists aimed to confuse traditional hierarchies and value systems. Many of their projects take the form of vast archives that resemble subjective encyclopedias, accumulated over decades with little distinction made between the important and the mundane. The exhibition includes slide-show presentations of postcardlike tourist views from Visible World (1986–2012) and Airports (1987–2012) that dare us to admit their beauty. In Fotografías (2005), hand-painted signs from amusement parks and carnivals are transformed into dozens of eerie small-format black-and-white photographs. Suddenly This Overview (1981– ), a series of tiny clay sculptures that chronicle an idiosyncratic world history, is installed on one of the Guggenheim’s ramps as a field of over 150 miniature tableaux. In the Aye Simon Reading Room, Untitled (Venice Work) (1995)—96 hours of real-time footage shot largely in the artists’ native Zürich and including myriad scenes of labor and leisure—serves as a meditation on what constitutes the everyday in this European city and beyond. 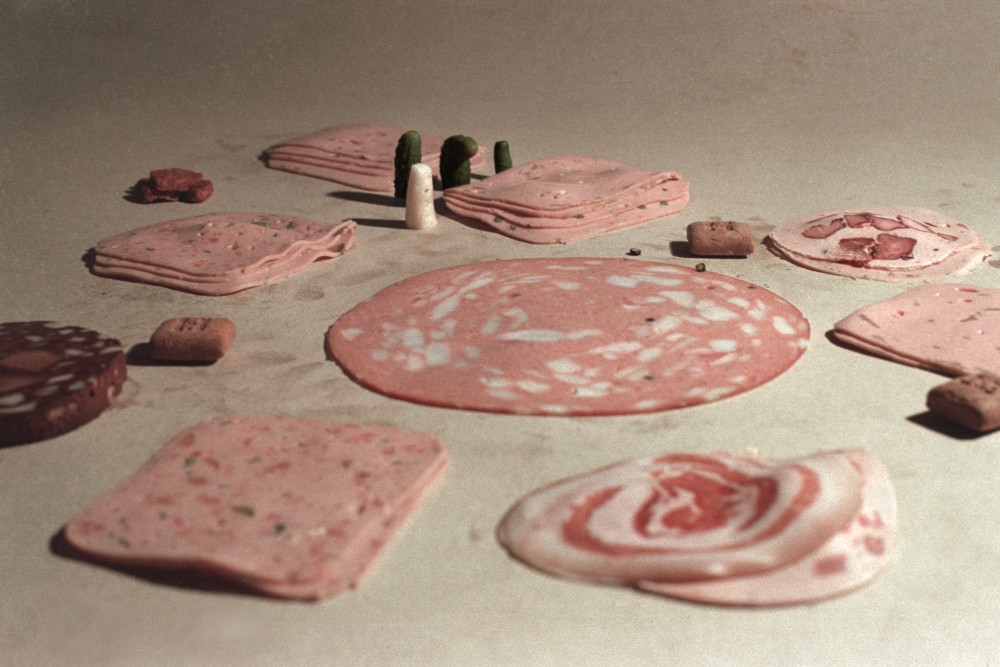 When not documenting the world around them, Fischli and Weiss played with signs and symbols for that world. In their first project, Sausage Series (1979), the artists emulated vignettes from classical paintings and popular culture in photographed compositions of luncheon meats and household items. Subsequent series such as Rubber Sculptures (1986–88/2005–06) and Cars (1988) bring heightened attention to the products that populate daily life. This impulse culminated in various polyurethane installations (1991– ) that cannily subvert the Duchampian readymade with painstakingly hand-carved copies of ordinary objects ranging from table lamps, cassette tapes, and pizza boxes to the paint cans, wood scraps, and tools occupying the artists’ studio. These surrogates are meant not so much to confuse as to give pause. They are simple reminders of a more complicated existence that become holes in our perception, like blank spaces or cutouts. Unstitching the fabric of reality, Fischli and Weiss consistently courted the implausible. They often spoke about their deliberate “misuse” of time and materials. In the series of photographs titled Equilibres (A Quiet Afternoon) (1984–86) and their renowned video The Way Things Go (1987), they recorded unlikely balancing acts and chemical reactions that animated the most mundane of objects in ballets of utter precariousness. The artists created systems doomed to fail and found delight in the entropic beauty of imminent collapse.

Wyeth: Andrew and Jamie in the Studio @MuseoThyssen The Passion According to Carol Rama @IMMAIreland