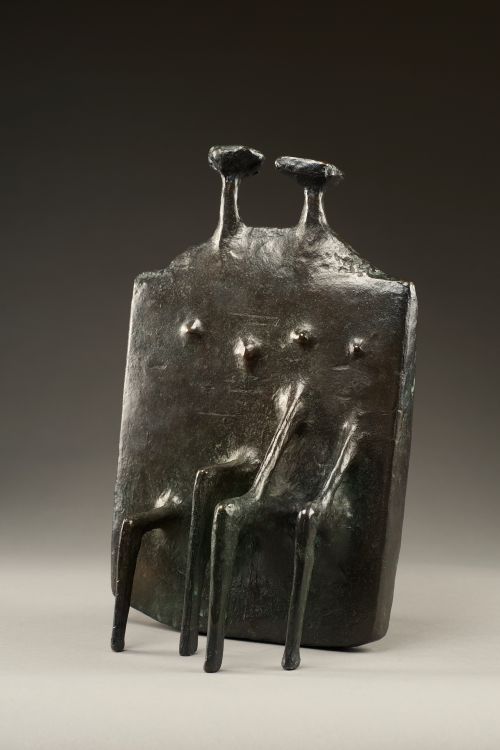 In January 2011, Robert Bowman Modern will be holding a selling exhibition of Modern British Sculpture. The show will coincide with that of their neighbour the Royal Academy who is hosting its first 20th-Century British Sculpture exhibition for 30 years.

The exhibition features a number of works by Jacob Epstein (1880-1959), one of the leading pioneers of Modern British Sculpture. In his lifetime he championed many of the concepts central to modernist sculpture, including ‘truth to material’, direct carving, and inspiration from so-called primitive art, all of which became central to twentieth-century practice.

Among the highlights of the exhibition is a rare Epstein maquette for ‘Rush of Green’ commissioned by Lord Samuel for Bowater House, Knightsbridge, London. Property developer Harold Samuel built Bowater House between 1956 and 1958 at the beginning of the first post-war redevelopment of London. To commemorate the commission, Lord Samuel also requested Epstein cast four maquettes for Lady Samuel and their three children. This maquette is from the estate of Lady Samuel who said that work on the monumental sculpture was completed on the day of Epstein’s death, 19 August 1959. The original project drawings for this sculpture are in the Henry Moore Institute.

Lord Samuel, the man behind the maxim; ‘There are three things you need in property, location, location and location’, was an avid art collector and connoisseur who built up one of the finest collections of Dutch and Flemish paintings in the UK, since bequeathed to the Mansion House art collection.

Another highlight of the exhibition is Epstein’s portrait bust of Albert Einstein.
Einstein posed for Epstein in 1933, sitting for him each day for two hours over a three day period before Einstein left to take up a professorship at Princeton.
Epstein said of the encounter; ‘Einstein’s manner was full of charm and bonhomie…(he) appeared dressed very comfortably in a pullover with his wild hair floating in the wind. His glance contained a mixture of the humane, the humorous, and the profound. This was a combination, which delighted me. He resembled an ageing Rembrandt…‘

Epstein is undoubtedly the most versatile and famous portrait sculptor of the twentieth century. The Einstein bust is the most impressionistic of Epstein’s portraits partly as a result of the speed with which the work had to be done, but also because of a conscious decision to play up to the Rembrandt-esque humanity of Einstein’s head. The deeply broken surface, in which each modelling gesture is distinctly visible, results in a sculptural impasto.

The portrait of Albert Einstein was first exhibited at Tooth’s in 1933. Two casts entered public collections within a year, one at the Fitzwilliam Museum and the other at the Tate. Further casts are now at the Hirshhorn Museum, Princeton University, London Science Museum, and Walker Art Gallery, Liverpool.

Leon Underwood (1890-1975) has been called the father of the modern sculpture in Britain and Robert Bowman Modern is delighted to show ‘The Liar’, a unique bronze, cast by the artist himself in 1953. Like Epstein, Underwood drew his inspiration from Tribal Art. In 1928 he travelled in Mexico studying Mayan and Aztec sculpture and wrote several books on African Art.
These influences are evident in this mask-like bronze.

Although the development and range of Underwood’s work clearly show the importance of his achievements, his work has received a fraction of the acclaim that has been afforded to his pupil Henry Moore whom he taught at the Brook School of Art in Hammersmith, the college he founded in 1921.

For Kenneth Armitage (1916-2002), the 1952 Venice ‘New Aspects of British Sculpture’ exhibition was ‘really the beginning of my professional life’. The show also featured work by Adams, Butler, Chadwick, Clarke, Meadows, Paolozzi and Turnbull,
provoking intense interest and ushering in a new wave in British sculpture.
Peggy Guggenheim, Elsa Schiaparelli, the Museum of Modern Art in Rome and MoMA all bought pieces at this seminal
exhibition.

Included in the Robert Bowman Modern exhibition is the maquette for ‘Diarchy’ which featured in Armitage’s one-man show at the Venice Biennale in 1958 where he won the David E. Bright Foundation Award. ‘Diarchy’ was purchased by the Tate in 1971.

Two of the foremost modern British female sculptors, Barbara Hepworth (1903-1975) and Elizabeth Frink (1930-1993) are also represented in the exhibition.

Hepworth revealed her move towards abstraction at her exhibition at Tooth’s in 1932. This became the abiding direction of her work, epitomised by the pioneering piercing of the block. A further highlight in the exhibition is the only Barbara Hepworth sculpture ever to be executed in glass. ‘Two Forms (Gemini)’ was commissioned by the Carborundum Company of Niagara Falls, New York, and created at the Barthmann Cristall Foundry in Wolfach, Germany.

‘Horse and Rider’ by Elizabeth Frink was originally commissioned in 1974 by de Beers as the trophy (complete with diamonds) for the King George VI and Queen Elizabeth Stakes- Britain’s most prestigious annual open-age flat race, which takes place at Ascot in July.
Frink’s affection for horses stemmed from her Suffolk childhood.
Her father was a brilliant horseman, a good polo player and an amateur jockey. One of the leading lights of the post-war school of British sculptors, Frink’s work is characterised by her scarred surfaces created by repeatedly coating an armature with wet plaster; each coating is distressed and broken, eliminating detail and generalising form.

The Modern British Sculpture show responds to the increasing interest in this genre and follows the success of Wild Thing! and the Henry Moore retrospective at the Tate. Modern British Sculpture has continued to perform strongly at auction even creating record prices in the dark days of the recession. In 2008 Henry Moore’s Draped Reclining Woman sold for a record price of over four million pounds.