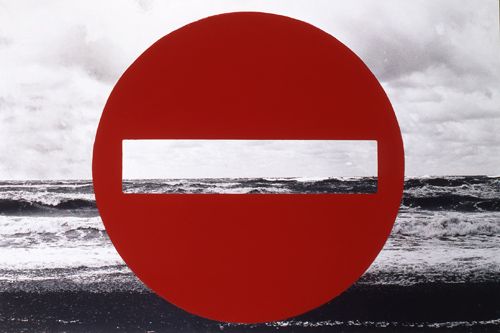 Ivan Chuikov has long been and remains a challenging figure in the international art scene – this is what makes him truly unique. The universally acknowledged classic of conceptual art who opened a window to Europe, ‘the prince of emptiness’, ‘the heretic of the easel’, the embodied contradiction, the dandy of postmodernism… All these titles exist simultaneously, assuming that the artist stays true to his enduring method – the combination of sharp thought and flawless plastic quality.

Windows series, Ivan Chuikov’s trademark, is the ultimate metaphor of the border between periods, art and life, artist and the world. The secret concealed behind the veil of every description, the secret that the author keeps putting in our minds, is still an intriguing one.

The heresy of simplicity, new to Ivan Chuikov, is balanced in the exhibition with Yin-Yang, the playful series of puzzles, while Virtual Sculptures and the elegant Labyrinth frame the famous cycles – Variants, Road Signs, and Fragments – the unique and recognizable Chuikov’s paintings that, starting from Bather (1970), has become the heritage and emblem of Russian art.

The display unites all major installations by the artist (Theory of Reflection, Device for Watching Emptiness, Split Identity), as well as lesser-known works and Far and Close album.

Far and Close is the assembly of records done in a single breath on May 18, 1976; today they look like a mature, accomplished and surpassed plan for the next thirty-odd years. The review of all the genres of painting, the reflections of reality and imagination, the relations of the event and its representation were stated here for the first time, even before the abovementioned cycles appeared.

Curiously enough, Ivan Chuikov treats the text, which is a rare material in his art, in his recognizable manner, by appropriating and fragmenting the time – in the same way as he would later appropriate and fragment the space of his own or someone else’s visual statement.

The spectator is supposed to pass through the labyrinths of meaning and revise, together with the artist, the boundaries of far and close.

Artworks from the collection of the The State Russian Museum, The State Tretyakov Gallery, The National Center for Contemporary Art, Regina Gallery, XL Gallery, Moscow Museum of Modern Art.