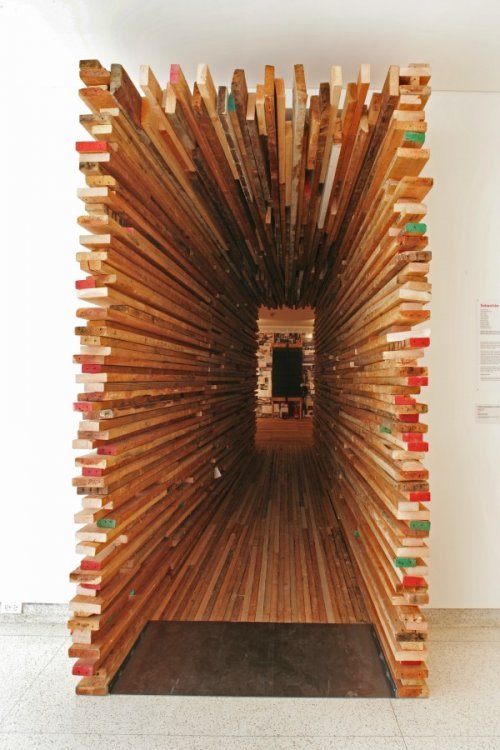 [ad#lb]
MIX: Nine San Diego Architects and Designers, an exhibition providing in-depth presentations of the work of nine architects and designers in the San Diego region, opened May 22, 2009, at MCASD in La Jolla. Selected for their unique, idiosyncratic practices, this distinctive group emphasizes a multidisciplinary approach and has played a wider role in negotiating the economic factors underlying architecture in the San Diego region and beyond. estudio teddy cruz, Luce et Studio Architects, Sebastián Mariscal Studio, Public (James Gates and James Brown), Rinehart Herbst (Todd Rinehart and Catherine Herbst), Lloyd Russell, and Jonathan Segal FAIA are garnering national and international attention, and this exhibition is an opportunity to view their work as a group through September 6, 2009, at MCASD’s La Jolla location.

MIX features seven project rooms, one for each firm, and encourages the studios to go beyond the common presentation of typical architecture exhibitions. As a result, the seven studios engage in self-analysis and scrutiny of their own histories that many have not attempted before. The evolution of designs and development strategies are presented in a range of formats including models, plans, photographs, film, and video. Brilliant diagrammatic representations of social and economic conditions show how proposals emerge, and sculptural forms express the development of intricate modes of construction.

A common thread throughout the variety of presentations is an inclination towards revealing processes that often lie hidden behind the material and stylistic façade of architecture. The demonstration of these processes is the axis on which this exhibition centers and parallels the importance of practice to the MIX architects and designers, who seek to maintain direct engagement with, as well as enrich, the material and social fabric of their sites and contexts.

MIX, Teddy CruzTeddy Cruz of estudio teddy cruz addresses U.S./Mexican transborder urban dynamics, and the politics of migration and development, in his installation in Axline Court, the central space adjacent to the entrance of MCASD La Jolla. With wall text, images, video, and models, Cruz examines the social and political implications of architecture and development. In Radicalizing the Local: 60 Miles of trans-border Urban Conflict, a large, horizontal photo mural presents a 60-linear-mile cross-section of images beginning 30 miles north of the international border between the United States and Mexico at the San Diego/Tijuana checkpoint–the most trafficked international border in the world–and stretching 30 miles south of the border into Tijuana. The work documents conflicts such as those between privatization and public space, between military bases and environmental zones, and between the natural and political boundaries.

MIX, Jennifer LuceJennifer Luce, principal of Luce et Studio Architects, specializes in interiors, and uses her long, narrow gallery space to showcase a vast assortment of objects that provide inspiration for her work, all presented on over 80 feet of steel and waxed steel custom tables with acrylic table tops. Luce’s design notebooks are also presented, and visitors can make connections between the objects, journals, and images of completed projects. Lead fishing lures and wire in Lure form a curtain over one window in the gallery.

MIX, PublicA manifesto painted on a large piece of corrugated sheet metal provides a focal point in the exhibition installation created by James Brown and James Gates of Public. The subject of the manifesto is relations and economic disparities between the United States and Mexico, and along with scores of models of the firm’s built work, the piece demonstrates the thoughtful approach of this studio. Public presents its work using three physical components: drawings, three-dimensional constructions, and a wall mural. The three-dimensional constructions–made with found boxes and other materials–were completed first. The boxes were collected long ago, and say something about Public’s work. These found vessels help inform the work contained within them. The preoccupation with making collages of existing material and found objects, alongside new materials, has been central to Public’s architectural work.

MIX, Rinehart HerbstRinehart Herbst (Catherine Herbst and Todd Rinehart) created a three-part photo-grid wall structure to represent their process and research in constructing Woodbury University. Contained by this structure, Potential Architectures, is a model built as a steamer trunk that folds on itself. The piece is described by Rinehart Herbst as a “[re]model” of Woodbury University and transports the viewer “into the limitless spatial possibilities made from reconfiguring and rendering the ‘scale-less’ space that is Woodbury’s new home. By stacking and folding the layout of the existing plan, the model encourages a way of seeing that parallels the students’ path of discovery through the architecture curriculum. The model generates variations and potential architectures.”

MIX, Lloyd RussellLloyd Russell’s 4,000-pound rammed dirt form creates a dramatic base for a model of Rimrock Ranch, his Pioneertown, California, vacation home/rental/performance space project designed for a musician and surf-wear entrepreneur. Russell works with an analog process that allows him to reconfigure his project designs, providing maximum flexibility within the budgeted cost per square foot, and his Abacus Mass Model presents this system in a floor-to-ceiling abacus of poles with models and architectural components. Animated Abacus, a stop-motion film by Russell and Justin Marr, demonstrates Russell’s process in the adjacent video gallery, which was designed by Russell himself. A model of Russell’s own live/work space, R3 Building, is among the realized projects presented in this gallery.

MIX, Jonathan SegalJonathan Segal FAIA’s angled, cut walls give approaching visitors glimpses into his space filled with models of projects both realized and underway, and large-scale photographic images of completed work. The installation provides insight into Segal’s involvement as both developer and architect on his projects, an approach shared by several other architects featured in MIX.

For example, the presentation of KLofts, a multi-family, mixed-use development in San Diego’s Golden Hill neighborhood, followed a participatory design process, creating positive connections between and among its residents, community stakeholders, local government officials, and civic groups. The design creates a building with public and private spaces that promote social interaction, shared use of space, and aids in revitalizing a community and improving its physical fabric. The project allocates 10% of its units as affordable housing without city subsidies.

In conjunction with the exhibition, MCASD will present the following related public programs.

The first of two architectural tours providing a rare and in-depth opportunity to explore significant San Diego architectural sites, the day’s excursion will focus on the downtown region. Led by the architects themselves, this exclusive bus tour will feature sites by Lloyd Russell, Jonathan Segal, Sebastián Mariscal, Public, Jennifer Luce, and Rinehart Herbst. Lunch will be provided, and the day will end with an optional happy hour with the architects and MCASD staff.

*Please note: This program has limited capacity, and as a result first-priority ticket purchasing will be given to MCASD Members. Tickets will be available exclusively to Members from June 1-12 at all MCASD locations. Tickets will be available for the public to purchase beginning June 13. To learn more about this program or to RSVP, contact the Membership office at 858 454 3541 x172 or membership@mcasd.org.

The second of two architectural tours, this excursion will focus on significant sites in the North County and coastal region. Led by the architects themselves, get an exclusive first-person look at sites by Teddy Cruz, Jennifer Luce, Public, Sebastián Mariscal, and Jonathan Segal. Lunch will be provided, and the day will end with an optional happy hour with the architects and MCASD staff.

*Please note: This program has limited capacity, therefore first-priority ticket purchasing will be given to MCASD Members. Tickets will be available exclusively to Members from June 1-12 at all MCASD locations. Tickets will be available for the public to purchase beginning June 13. To learn more about this program or to RSVP, contact the Membership office at 858 454 3541 x172 or membership@mcasd.org.

The second of two roundtable discussions, this event will feature Sebastián Mariscal, Lloyd Russell, Jennifer Luce, and Jonathan Segal. Each participating architect and designer will give an overview presentation of his or her work, followed by a lively roundtable discussion moderated by Sam Lubell, California Editor of The Architect’s Newspaper.

Exhibition Support
MIX: Nine San Diego Architects and Designers is made possible, in part, by The Getty Foundation, which supported the project’s interpretive materials and research. This is part of a series called Connecting to Place. Additional support comes from the County of San Diego Community Projects Fund and the Office of Supervisor Pam Slater-Price, the San Diego County Community Enhancement Program, and MCASD’s Annual Fund donors. Corporate support for the exhibition is provided by Arclinea San Diego and bulthaup San Diego. The Architect’s Newspaper is the exhibition’s official media sponsor.