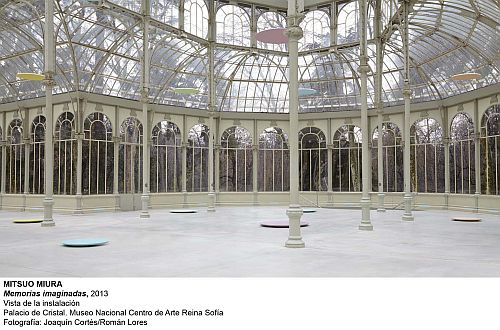 The intervention by Mitsuo Miura (Iwate, Japan, 1946) at the Palacio de Cristal is based on a pictorial installation oriented ultimately toward architecture and landscaping. By means of essential forms distributed around the space, with somewhat faded colors representative of a certain diffuseness, the artist proposes the creation of constructive forms that are merely suggested, and which relate to essential schematizations of experiences and images stored in his memory. The viewer can be a symbolic participant by making use of his or her own imagination and memory, here applied to an ambience linked as closely to the natural and organic as it is to the urban and cultural.
Mitsuo Miura is an artist who has lived in Spain since 1966. His work is distinguished by the use of shapes close to geometry, colors that are given clear definition in keeping with the subjects treated, a variety of methods, techniques and disciplines, and a proximity to the languages of movements of the second half of the twentieth century, such as minimalism. His work tends to establish a dialogue between the materials exhibited and the space which houses them, and at the same time hints almost imperceptibly at elements of nature, stylized and reduced to their minimum expression.
The starting point of Imagined Memories is a set of colored circles distributed around the floor of the Palacio de Cristal, and another identical set hanging above them from the roof. Created between the two is an imaginary object, a column, which suggests the creation of a new architectural space, one imagined rather than constructed. In this way, the transparent surroundings of the ‘Crystal Palace’ are transformed into a hypostyle hall, like one of those “forests of columns” held especially sacred in antiquity. This refers back to the genesis of an ancient architectural element, the column, which originated as a schematized tree trunk.
Viewers find the necessary correlation in the verticality of the trees in the Retiro Park, drawing the shafts in their minds by imagining vertical lines linking each pair of circles. Miura thus works in the way that memory operates, through the virtual reactivation of an imaginary space, which may or may not have existed and so can only be completed mentally. This also underlies the second aspect of his intervention, which is the intermittent distribution of strips of color along the inner plinth of the building, suggesting a sketchy drawing of a indefinite plan. In this way, the installation reminds us that architecture is no more than the physical delimitation of an already existing space. Constructive elements – in this case columns and plinths, the horizontal and vertical markers of the spatial expanse of an edifice – are no more than lines drawn in the void.
Through this visual game, defined by both color and transparency, he flees from the monumental installation and any attempt at grandiloquence. Instead he intervenes discreetly, leaving vital space for both the public and the setting. The natural space thus becomes a backdrop and subtext completing the work of an artist who, notwithstanding the degree of stylization and abstraction of his work, claims to be a “painter of landscapes (everyday experiences)”.
By acting upon the Retiro Park, a natural environment inserted within the city’s fabric, Miura’s interest in natural landscape intersects with his more recent attention to the urban environment. Completing this dialogue is the iridescence which the external light produces on the chromatic surfaces, their appearance altering slightly with the shifting weather and the time of day.