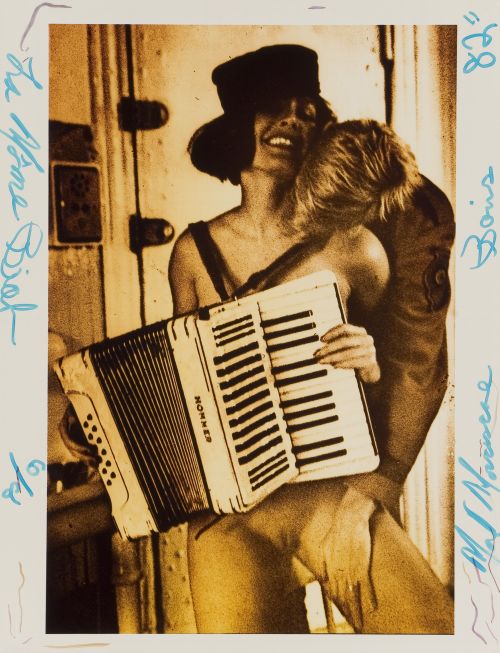 title
Mark Mark Morrisroe, a great well-known/unknown figure from the Boston art world of the early eighties, surrounded himself with a lively, eccentric bohemian art scene that had originated in the punk movement. Already during his school years, Mark Morrisroe published the legendary Dirt magazine together with Lynelle White. In Summer 1981 he performed in the clubs of Provincetown as the “Clam Twins”, with Steven Tashian, alias Tabboo!, and made the Super-8 film The Laziest Girl in Town that same year. Early on he met Jonathan (Jack) Pierson, whom he photographed again and again. In Pat Hearn, he found an artist friend and close confidante, who stood by his side until his early death from AIDS.

Despite the period of his activity lasting only ten years, Mark Morrisroe left behind a photographic oeuvre whose vitality and opulence is surprising. With this first museum retrospective in Europe, the work of Mark Morrisroe is on the cusp of rediscovery. His color and black-and-white photographs, gum prints, and elaborately worked “sandwich” prints, as well as his countless Polaroids, show touching moments of intimacy and real friendship. Photographs of lovers, friends, views of New York, still lifes, and also his late darkroom work, manipulated X-ray images of his body wasting away, and irradiated pages from porno magazines all prove how directly and vividly Mark Morrisroe captured his life.

The exhibition, curated by Beatrix Ruf and Thomas Seelig, is a collaboration between Fotomuseum Winterthur and the Estate of Mark Morrisroe (Ringier Collection). A comprehensive catalogue book on the exhibition will be published by JRP-Ringier with texts by international authors as well as a biography and commentary by Teresa Gruber, who manages the Mark Morrisroe estate.