Looking In: Robert Frank’s The Americans 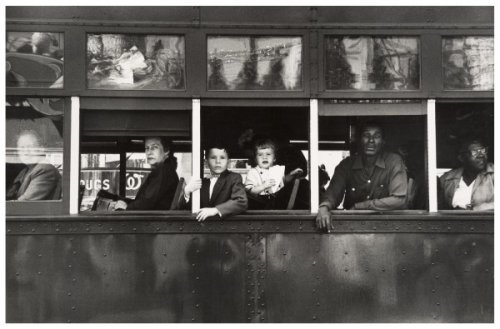 [ad#lb]
The 50th anniversary of the publication of The Americans, Robert Frank’s ground-breaking book of black-and-white photographs, will be celebrated with the major exhibition Looking In: Robert Frank’s The Americans, on view at The Metropolitan Museum of Art September 22, 2009–January 3, 2010. Robert Frank is one of the great living masters of photography, and his seminal book The Americans captured a culture on the brink of social upheaval. The exhibition traces the artist’s process of creating this once-controversial suite of photographs, which grew out of several cross-country road trips in 1955 and 1956. Born in Switzerland in 1924, Frank was an outsider encountering much of America for the first time; he discovered its power, its vastness, and—at times—its troubling emptiness. Although Frank’s depiction of American life was criticized when the book was released in the U.S. in 1959, The Americans soon became recognized as a masterpiece of 20th-century art. Looking In: Robert Frank’s The Americans features all 83 photographs from his original book. Remarkably, the exhibition at the Metropolitan will be the first time that this body of work is presented in its entirety to a New York audience.

The exhibition is made possible by Access Industries and the Blavatnik Family Foundation.
Additional support is provided by the William Randolph Hearst Foundation.
The exhibition was organized by the National Gallery of Art, Washington.

Looking In: Robert Frank’s The Americans is the most comprehensive and in-depth exploration of Frank’s original book ever undertaken and will feature more than 100 photographs, 17 books, and 15 manuscripts, as well as 22 contact sheets made from the artist’s negatives. First published in France in 1958, The Americans remains the single most important book of photographs published since World War II. The exhibition begins with an examination of the roots of The Americans through a display of Frank’s earlier books and other series of photographs made in Europe, Peru, and New York in the late 1940s and early 1950s. In this prefatory group of works, the artist had already established his style of street photography and his thoughtful approach to sequencing his photographs.

In 1955 and 1956, with funding from a Guggenheim Fellowship, the young photographer undertook a 10,000-mile Beat-inflected journey across more than 30 states. While crisscrossing the U.S., Frank made more than 27,000 photographs. The exhibition follows the artist’s process through his production of more than 1,000 work prints, and a year spent editing the images, selecting the photographs, and constructing the sequence. A large display comprised of rough work prints Frank made in 1956 and 1957 reveals the themes he wanted his book to explore: racism, politics, consumer culture, families, and the way Americans lived, worked, and played. Vintage contact sheets and letters to photographer Walker Evans and author Jack Kerouac also help trace Frank’s preparations and planning for the book.

The centerpiece of the exhibition is the presentation of all 83 photographs from The Americans, often in rarely exhibited vintage prints, and in the sequence that Frank established. The first image in the book, Parade—Hoboken, New Jersey (1955) sets the tone for Frank’s journey of discovery across the country: two women stand in their respective windows, one face in shadow, the other’s view obstructed by a large and billowing American flag. Trolley—New Orleans (1955), a signature work by Frank in the Museum’s collection, depicts streetcar passengers of different ages, genders, and races that brings to the forefront racial politics in the segregated South and the hierarchies among men and women, the young and the old.

Frank often focused on introspective individuals. Rodeo—New York City (1954) is a study of a cowboy—not in the West, but on the streets of Manhattan, in town for a show at Madison Square Garden. Elevator—Miami Beach (1955) inspired Jack Kerouac to write in his introduction to the original book, “…that little ole lonely elevator girl looking up sighing in an elevator full of blurred demons, what’s her name and address?”

Frank also found beauty in overlooked corners of the country and, in the process, helped redefine the icons of America. U.S. 285, New Mexico (1955) is a view of the open highway that reminds us of the raw poetry of the journey itself. In his photographs of diners, cars, and the road, Frank pioneered a seemingly intuitive, off-kilter style that was as innovative as his choice of subjects. Equally influential was the way he sequenced photographs in The Americans, linking them thematically, formally, and emotionally, and ultimately creating a haunting picture of mid-century America.

The conclusion of the exhibition addresses the impact of The Americans on Frank’s subsequent career and includes still photographs and a short film made by the artist in 2008 especially for this exhibition.

The exhibition was organized by Sarah Greenough, senior curator of photographs at the National Gallery of Art. It is organized at the Metropolitan Museum by Jeff L. Rosenheim, Curator in the Department of Photographs.

The exhibition is accompanied by a catalogue published in two different editions by the National Gallery of Art in association with Steidl. The 396-page softcover edition features 384 illustrations and essays by Sarah Greenough, Jeff L. Rosenheim, Anne Wilkes Tucker, Stuart Alexander, Martin Gasser, Michel Frizot, Luc Sante, and Philip Brookman. The hardcover edition was expanded to also include reproductions of the artist’s contact sheets, correspondence, and archival documents; a comparison of varying editions of The Americans; and a chronology and map. The hardcover edition is 528 pages with 486 illustrations. Both editions will be available in the Museum’s bookshops ($75 hardcover, $45 softcover), as well as the facsimile of the original U.S. edition of The Americans (Steidl, $39.95).

The Metropolitan Museum will offer extensive programming in conjunction with the exhibition. In “An Evening with Robert Frank” on October 9, the artist—in a rare public appearance—will discuss his career in photography and film, in conversation with Jeff L. Rosenheim and Sarah Greenough. Other programs include: a Sunday at the Met program on October 4 featuring a panel discussion with Jeff L. Rosenheim, writer and critic Luc Sante, and publisher Barney Rosset; and a Robert Frank film series in October, featuring Pull My Daisy (1959), Conversations in Vermont (1969), Me and My Brother (1965–68), Cocksucker Blues (1972), and Candy Mountain (1987). The Museum will also present a concert in honor of the artist by Patti Smith on October 17 titled “A Salute to Robert Frank, Artist and Friend.” All of these programs will take place in the Metropolitan Museum’s Grace Rainey Rogers Auditorium.

Screenings of films and videos by the artist will also take place in the Uris Center for Education, including Life-raft Earth, About Me: A Musical, Life Dances On, Energy and How to Get It, Keep Busy, Home Improvements, C’est Vrai, and Last Supper. Additional programming includes a “Film and Art” class for ages 15-18; numerous gallery talks by curator Jeff L. Rosenheim; a “Picture This!” workshop for adults who are blind or partially sighted; a photography class for people with visual impairments; and a teacher workshop. The exhibition also will be accompanied by a podcast and will be featured on the Museum’s website at www.metmuseum.org.

The exhibition was previously on view at National Gallery of Art, Washington, and the San Francisco Museum of Modern Art.