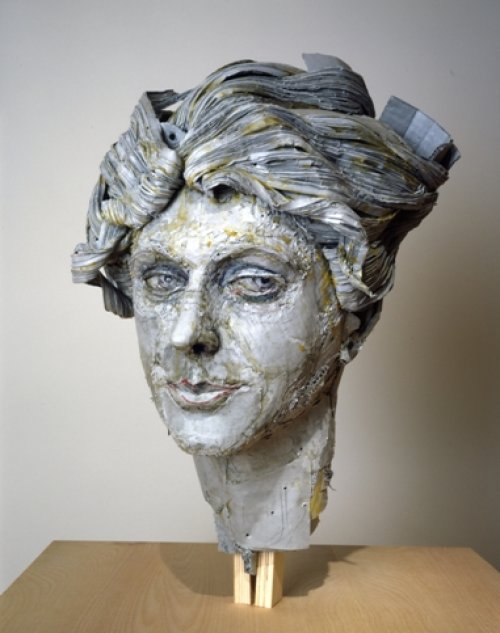 [ad#lb]
Artist Scott Fife has long been obsessed with the historic characters that helped shape the time we live in; characters that have often fallen into the dark recesses of history. Through his re-creations, Fife offers us a renewed perspective reminding us of the famous quote by George Santayana, “Those who cannot remember the past are condemned to repeat it.”

One such historic event with national impact, and the focus of this exhibition, was the assassination of Idaho Governor Frank Steunenberg in 1905. The murder occurred in Caldwell, ID, and the subsequent trial in 1907 was held in Boise, ID. Although this tragic drama was played out over a century ago, its relevance today must not be understated. The story of a small town in a small state, thrust into a national spotlight as a consequence of unrest associated with the extractive industries, is not lost on a Montana audience. Montanans too, have a long history that has borne witness to the consequences of labor’s upheaval and industry’s selfish acts. Much of this historical labor drama was played out again and again and then set aside, out of the spotlight, forgotten, to fade into the recesses of our collective memory.

Fife works in a non-traditional medium, recreating busts with archival cardboard. His surfaces are rough, yet the busts closely resemble the characters they portray. He cuts, tears, sands, gessoes, and uses sheet rock screws as elements of these additive constructions.

In The Idaho Project, Fife has recreated the cast of over a dozen colorful characters associated with the assassination of Governor Steunenberg and the subsequent trial, including Governor Steunenberg and his assassin Harry Orchard, union leader “Big
Bill” Haywood, defense attorney Clarence Darrow, actress Ethel Barrymore, President Teddy Roosevelt, and prosecuting attorney and later Idaho Senator William Borah. Fife states,
“For this piece I worked with portraits, using references to classical portraiture busts of the Roman Republic era to portray participants in the historic trial. The sculpture speaks of class struggle, political intrigue, and the country’s economic and social landscape of capitalism and populism.”

MAM is thrilled to present this regionally significant exhibition. An authoritative account can be accessed by reading Anthony Lukas’ highly regarded book Big Trouble: A Murder in a Small Western Town Sets Off a Struggle for the Soul of America. This account captured Fife’s imagination and inspired this remarkable body of work.