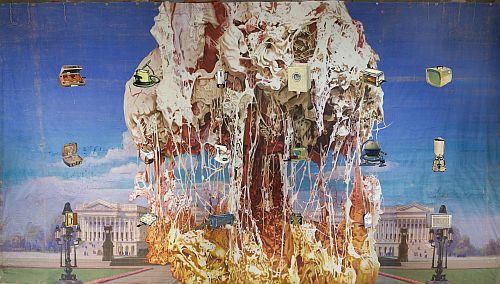 This summer Klaas Kloosterboer, Chris Martin and Jim Shaw will transform the Submarine Wharf into a gigantic art studio. This is the fourth consecutive summer that Museum Boijmans Van Beuningen is organising an exhibition of contemporary art in Rotterdam’s docklands.
Klaas Kloosterboer (1959), Chris Martin (1954) and Jim Shaw (1952) think on a monumental scale and will fill the 5000m2 Submarine Wharf with paintings, installations and objects. The exhibition ‘XXXL’ brings together new and existing works. This summer the Submarine Wharf will take on the appearance of a vast artist’s studio. In the months leading up to the opening, the artists will be busy at work in the wharf, creating the exhibition on site. Museum Boijmans Van Beuningen wishes to demonstrate the resilience and energy of the art of painting with a true ‘battle of the Titans’ between the three artists.
The Amsterdam-based artist Klaas Kloosterboer can be seen as an ‘inventor’. He experiments constantly, altering the form and appearance of his paintings. The exhibition will include works from the collection of Museum Boijmans Van Beuningen, augmented with loans and new works. Chris Martin lives and works in New York and is the ‘savage painter’: he uses his energy to make each painting an explosion of colour and power. In ‘XXXL’ he will exhibit thirty existing paintings, and in the weeks leading up to the opening he will work on a new painting measuring 13 x 10 metres. Jim Shaw, the ‘storyteller’ from Los Angeles completes the trio. He paints and draws in a figurative, sometimes cartoon-like style on old film sets. In the Submarine Wharf he will present these ‘backdrop’ paintings, some measuring 4 x 15 metres.
The three earlier exhibitions that Museum Boijmans Van Beuningen organised in partnership with the Port of Rotterdam were devoted to Atelier Van Lieshout in 2010, the art duo Elmgreen & Dragset in 2011, and Sarkis in 2012. The public and press were extremely enthusiastic about all three shows. De Volkskrant praised the 2010 exhibition as: ‘This summer’s undisputed art hit’. In 2011 Trouw reported: “As a visitor you are sucked in to this surreal world in which you no longer know what is real and what is staged.” In 2012 Het Parool wrote: “The exhibition Ballads is a lively meeting place. (…) absolutely fascinating the more you read and learn about it.”