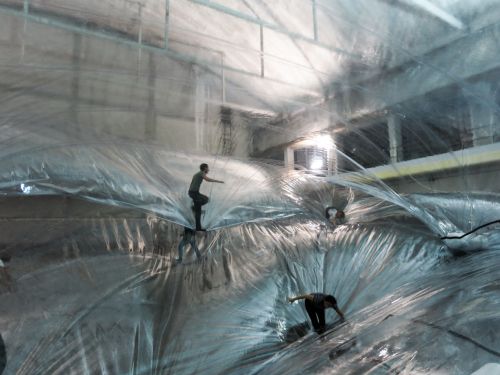 Tomás Saraceno (b. San Miguel de Tucumán, Argentina, 1973) is an artist and architect internationally known for his visionary and surprising installations accessible to the public and able to modify the perception of architectural spaces. His oeuvre, inspired by the tradition of 20th-century utopian architecture, stems from the desire to create aerial structures that can be inhabited by people, are self-sufficient and have a low environmental impact.

Saraceno, who refers to himself as “living and working between and beyond planet Earth”, bases his work on themes such as the elimination of geographical, physical, behavioural and social barriers; the research into sustainable ways of life for humanity and the planet; the encounter and exchange among different disciplines and bodies of knowledge; the model of networking and sharing applied to all phases of the invention and execution of works and projects.

At HangarBicocca Saraceno creates On Space Time Foam, a floating structure composed of three levels of clear film that can be accessed by the public, inspired by the cubical configuration of the exhibition space. The work, whose development took months of planning and experimentation with a multidisciplinary team of architects and engineers, will then continue as an important project during a residency of the artist at the Massachusetts Institute of Technology – MIT in Cambridge (MA).

On Space Time Foam is a very particular, unusual and suggestive work of art. It can be considered as an experiment that nevertheless requires the willingness to interact, individual and collective sense of responsibility and special behavioral conditions. For this reason we are providing rules and suggestions to guarantee to the public the best experience possible for the whole duration of the exhibition.