Holidays and Weekdays
Museum of Modern Art of the Russian Academy of Arts at 10 Gogolevsky Boulevard
December 17, 2009 – January 17, 2010 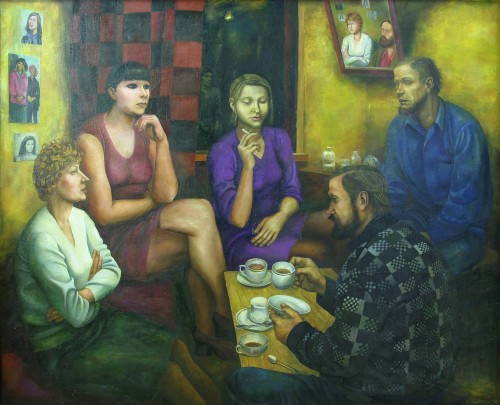 The painting and graphics collection of the 1970s-1980s constitutes an important part of the “ROSIZO” State Museum and Exhibition Center holdings. “Holidays and Weekdays” exhibition is timed to coincide with the “ROSIZO” 50th anniversary and the Moscow Museum of Modern Art 10th anniversary.
The 1970s are a significant stage in the development of Russian art, when Russia’s art scene was characterized by extreme diversity and dynamism. Gone were the battles with Social Realism, which had dominated the art scene of the preceding period. There was no longer a dominant art trend. Even “official” artists each worked in their individual artistic manner. Industrial scenes by D. V. Zhuravlev differ radically from similar works by A. V. Panteleyev, crisp landscapes by V. N. Sidorov are nothing like academic paintings by B. V. Scherbakov.
That period was marked by the opposition of official and underground art. However, everything was interrelated, and formal quests often lead rather conformist artists to the art radicals and dissidents’ camp. The merits of underground artists in fighting against boredom and the preponderance of officialdom are now well recognized. 2009 marks the 35th anniversary of the “Bulldozer Exhibition” – an important landmark in that struggle. Heroic efforts of non-conformists gradually widened the boundaries of the permissible for most artists who were still affiliated the Artists’ Union, and yet did not support official ideology with their art. They concentrated their efforts on figural searches, which what this exhibition aims to show. The paintings on view highlight the achievements of the artists, demonstrating the multifaceted art of the 1970s-1980s, which we have started to forget with time. Subsequent turmoils and revolutions edged it out, and the new artist generation sets entirely different tasks.
“ROSIZO” State Museum and Exhibition Center was founded by the USSR Ministry of Culture in 1959 to acquire, store art works and distribute them to museums, and to organize art exhibitions. “ROSIZO” still fulfills many of these functions. At present, it largely focuses on organizing art shows in Russia and abroad. It is for its exhibition activity, that “ROSIZO” is famous all over the world.
The formation of the «ROSIZO» collection has been complex. In Soviet times, the decision-making in acquiring art works was handled by the State Expertise Commission for the Ministry of Culture. Naturally, most art works at that period of time were bought from official artists, working within Soviet ideology. The vast majority of these works were then transferred to regional museums. As a result, a very small number of these works is left in «ROSIZO» collection. Exhibition activity in organizing Soviet art shows abroad lead to the creation of an exhibition fund, to which the best of the Soviet time acquisitions were selected. Thanks to this, we can now see works by T. Nazarenko, N. Nesterova, A. Sitnikov, O. Bulgakova and many other famous artists in the collection. After the collapse of the Soviet Union in the post-perestroika period, the unclaimed by museums holdings of the USSR Ministry of Culture and Zagorsk Art Archive were handed over to “ROSIZO”. That is how painting by O. Tselkov, Y. Rukhin, V. Makarenko, I. Kiblitsky, V. Kalinin made their way to the “ROSIZO” collection.
It should be noted, that the “ROSIZO” collection covers the entire territory of the former USSR. Alongside well-known Moscow and Saint Petersburg artists, the collection also features regional art schools. The famous Vladimir School is represented by K. Brittov, V.Yukin, and V. Kokurin, and the art of the Caucuses – by Y. Abisalov, M. Kelesayev, Sh. Bedoyev. The collection includes works by N. Karacharskov from Cheboksary, O.Ponomarev and A. Pozdeyev from Krasnodar, A. Panteleyev from Vologda, A. Sidikov and R. Kharisov from Ufa. Works by artists from former soviet republics complement the show.
State Museum and Exhibition Center “ROSIZO” does not have its own exhibition venue. Its collections are either exhibited abroad within “Days of Russian Culture”, or are shown as traveling shows in Russian regional museums. Ironically, they have almost never been displayed in Moscow, so the art of the 1970s-1980s is essentially shown in Russia’s capital for the first time. It is symbolic that the exhibition is hosted by one of the city’s youngest and most dynamic museums – Moscow Museum of Modern Art.
The exhibition does not aim to give a comprehensive overview of soviet art of this period. This is so far an insurmountable task for any existing museum. We hope that this show will remind the viewer of the recent past of this country reflected in art, that has been rejuvenated by the «burning pots of wars and tumults» of Russian history.

Happy New 2010 from worldwide museums The Christmas Story: Picturing the Birth of Christ in Medieval Manuscripts