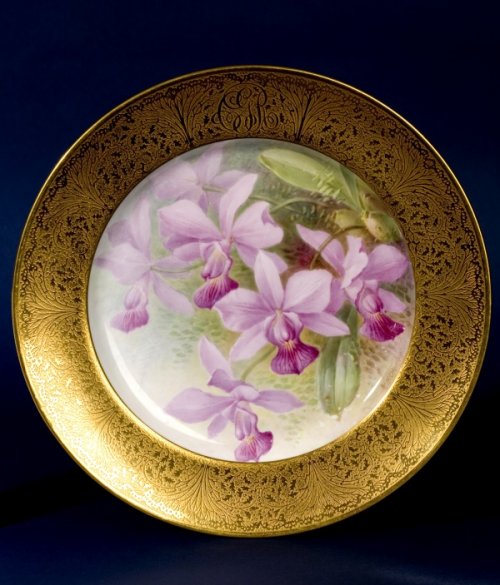 [ad#lb]
The Mint Museum of Art will present Faces & Flowers: Painting on Lenox China from August 22, 2009 through January 30, 2010. Lenox china is often referred to as America’s greatest porcelain. The exhibition will feature more than 70 objects, including plates, vases and decorative wares with exquisite paintings of orchids, figures, idealized women and landscapes.

Faces & Flowers highlights the remarkable talents of Lenox’s china painters, with works made by the firm’s leading artists for some of America’s foremost citizens, including orchid fancier Charles G. Roebling and Newark industrialist Franklin Murphy, who was governor of New Jersey from 1902 to 1905.

Walter Scott Lenox started the Ceramic Art Company in 1889 in Trenton, New Jersey (becoming Lenox China in 1906), with the ambition to achieve “the perfection of American porcelain.” To achieve his goal, Lenox hired the premier European and American porcelain painters of his time, including Bruno Geyer (Austrian, active late 19th – early 20th century), William Morley (British, circa 1869-1934), and Sturgis Laurence (American, 1870-1961). The quality and creativity shown in the wares from Ceramic Art Company/Lenox China surpassed the best porcelain produced in Europe at the time and enabled Lenox China to make its mark internationally. The company developed such a loyal following that it became the first American china to be used in the White House (during Woodrow Wilson’s administration).

The exhibition is organized and distributed by the University of Richmond Museums, Virginia. It appears at The Mint Museum thanks to the generous support of the Delhom Service League. An illustrated catalogue with an essay by the exhibition’s curator Ellen Denker, an independent scholar, is available for purchase in The Mint Museum Shops.