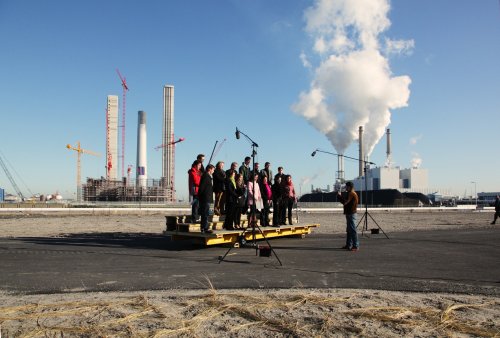 In 2009 several national and international artists undertook an artistic journey of discovery into the past, present and future of the Port of Rotterdam under the umbrella title of Portscapes, drawing inspiration from the port. Museum Boijmans Van Beuningen is showing ten art projects that resulted from it in a high-profile exhibition.

The construction of the Second Maasvlakte, an enormous reclamation project creating 2,000 hectares of land in the North Sea, prompted the Port of Rotterdam Authority to embark on an ambitious art programme. A series of art projects was put together in association with the art and public space foundation SKOR (Stichting Kunst en Openbare Ruimte) and Latitudes, a team of curators from Barcelona.

Containers
It wasn’t just the artists who were inspired by the port, the exhibition designers Overtreders W found their inspiration there too. They designed containers from industrial fabrics on the scale of real port containers. The projects will be shown in these translucent containers in the museum’s Richard Serra Gallery. Visitors will be able to walk between the containers and look at the results inside them, from films and slides to snatches of music, collages and objects. The little wooden boat in which Hans Schabus wandered around the port of Rotterdam, for example, can be seen at close quarters. Jan Dibbets’s artworks on the virgin Maasvlakte beach will also be shown in the museum.

New World
Artists have rarely been involved in a project like the Second Maasvlakte at such an early stage.
The different photographs, stories and objects reveal the world of the Second Maasvlakte and bring the new land to life. The Portscapes project confirms the historic relationship between Museum Boijmans Van Beuningen and the port.

The Subversion of Images – Surrealism, Photography, Film Pieter Aertsen and the world in disarray