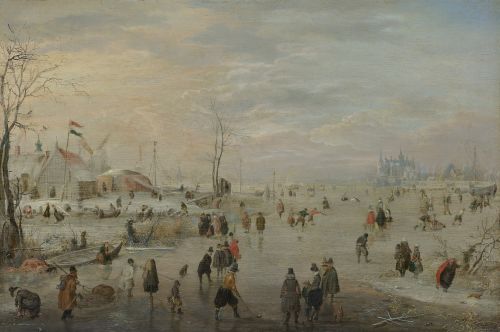 With its Dutch Winters exhibition, which runs from 24 November 2010 up to and including 21 March 2011, the Rijksmuseum Schiphol will display a selection of 17th- and 19th-century works from its own collection that depict the popular theme of winter in a multifaceted and sublime manner.

Hendrick Avercamp’s winter landscapes are among the best-known images in 17th-century Dutch painting. The frivolity in the cold depicted in his paintings creates the impression that every winter in centuries past was an extended period of freezing temps, which is true in a sense, as the period between approximately 1500 to 1850 is sometimes referred to as the ‘Little Ice Age’ due to the brutal winters and cool summers. Along with these 17th-century winter scenes by artists, such as Hendrick Avercamp and Jacob van Ruisdael, the Dutch Winters exhibition will also feature works from the 19th-century Romantic era by Barend Koekkoek. After focusing on the realism of August Allebé and The Hague School of Anton Mauve, the exhibition rounds off with the impressionistic work of George Hendrik Breitner and Isaac Israëls dating from around the turn of the century.