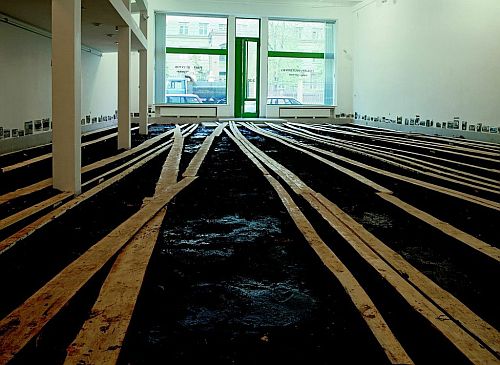 A large-scale exhibition of the works of Dmitry Gutov, one of Russia’s most prominent artists whose name became well-known in the latter part of the 1980s, is presented by the MMOMA with the support of Triumf Gallery. Gutov’s works were displayed at the following art exhibitions and fairs: the Venice Biennale (1995, 2007, and 2011); Documenta (2007); Manifesta (1996); the Istanbul Biennale (1992); the Valencia Biennale (2001); the Sao Paolo Biennale (2002), the Sidney Biennale (2006); the Shanghai Biennale (2012). His works were part of Volta New York (2009) and other foreign venues which held major exhibitions of Russian modern art. Gutov’s oeuvre was on display at some of the internationally-acclaimed museums and galleries of Russia and other countries: The State Tretyakov Gallery; The State Russian Museum; the Multimedia Art Museum, Moscow; Perm-36 (city of Perm, Russia); Guggenheim Museum; the Louvre; KIASMA Museum of Contemporary Art (Helsinki, Finland).

Dmitry Gutov always tended to working with art phenomena which have been long forgotten and repressed; the rejects thrown aside because they didn’t comply with major directions as to the development of art. Hence his interest in paintings produced by Peredvizhniki (19th century Russian realist painters involved in The Society for Traveling Exhibitions); for the above reason the artist is also interested in some of the unpopular philosophical teachings, theories and texts (e.g. Marx, Hegel). Out of the Soviet era wreckage and into the light the artist takes up the philosophic legacy of Mikhail Livshitz. Gutov also draws inspiration from Joseph Beuys’ graphics and Rembrandt’s sketches; his other sources of inspiration include Chinese calligraphy, graphic design of the Soviet magazines dating back to the 1950s and 1960s, Russian Orthodox icons, and compositions depicted on antique vases. The Soviet newspapers clippings form collages on the scraps of wallpaper (Space, 1988); the 1994 installation Above the Black Mud appears a reference to Yuri Pimenov’s Wedding on Tomorrow’s Street. In 1996, Gutov puts out the series “Dilettantism in Art” which consists of paintings created in an amateurish realist style – a rather bold move on the part of the artist.

The exhibition comprises photographs, videos, works made of metal, installations, graphics and paintings. The exhibition spans the 25-year period of Gutov’s career starting from 1988. Metal spatial sculptures from the series “Rembrandt’s Drawings”; the series “Icons”, and a few others centered on Chinese and Japanese calligraphy are going to the first exhibits the visitor is about to see. Some photographic and video projects on the other floors of the museum deal with harsh realities of the 1990s in Russia, e.g. The Town of Uryupinsk, The Blind. Other videos, such as A Light Sleep, Thaw and New Year evoke the sentiments of the 2000s.

Gutov’s retrospective exhibition at the MMOMA puts a lot of emphasis on photographs and video installations created by the artist after 1991. Shuttlecocks, Hammock, The 1960s or Let’s Talk about Love Again, Shostakovich, Feet, Parallax and other works will be accompanied with texts by modern art theoreticians, art critics, curators and artists including Viktor Miziano, Yekaterina Degot, Andrei Kovalev, Anatoly Osmolovsky. To give the visitor an idea of the modern Russian art criticism in progress, the annotations will also include some newspaper clippings bearing the contents of the original articles.

The entire floor of the museum will be allotted for the showing of Gutov’s paintings. The works on view belong to his series “Space”, “King Lear”, “Still Lives”, “Words Are also Deeds”, “Before 70” etc. Many of the works at the MMOMA exhibition haven’t been displayed in public for more than 20 years. Some of them were never exhibited at all.

The title of the exhibition makes a reference to the artist’s favorite quotation from Mikhail Livshitz’s The Crisis of Ugliness: “Those who have read the writings of Michel de Montaigne know that there is nothing humankind can be surprised at.”