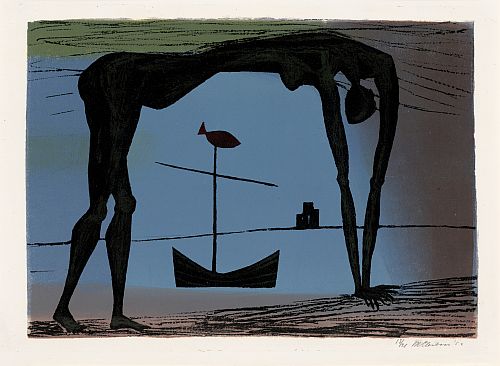 This summer the Print Room is hosting an exhibition of 35 lithographs by Rotterdamborn artist Wally Elenbaas. The exhibition coincides with the publication of the book ‘Grafiek Wally Elenbaas’.
The two-month exhibition in the Print Room comprises a selection of early prints by Wally Elenbaas (1912-2008). The majority of the works come from the museum’s own collection.
In addition to several book covers and New Year cards, the selection includes 35 lithographs in which the artist experimented with colour and sought a personal style. Elenbaas had an artistic career spanning more than seventy years and belonged to Rotterdam’s artistic vanguard. He made an important contribution to photography, but above all to the
development of colour printmaking in Rotterdam.

Rivers, ferryboats, birds, human figures and the sun are recurring motifs in Elenbaas’s works. He found these themes close to home, but his colour choices were inspired by his travels in southern Europe. In addition to his consistent themes and colour use, his works are recognisable from their static scenes with no action or movement, in which people
inhabit a dream world.

Elenbaas began as a photographer but after the Second World War shifted to etching because he felt this gave him greater expressive scope. Without a workspace and press of his own, he worked in the studio of Rotterdam-based printmaker Andreas Schotel. Several of the prints he made there were included in the exhibition Rotterdams grafiek (Printmaking in Rotterdam) at Museum Boijmans Van Beuningen in 1947. Following a conflict with Schotel, Elenbaas moved to the studio of the cultural centre Ons Huis (Our House) and abandoned etching in favour of lithography. Through endless experimentation he became a master of the one-stone lithograph. In this process the lithographic stone is reworked for each stage of the print, a highly complex procedure that meant that Elenbaas printed his lithographs in
very small editions.

In the Netherlands in the 1950s Elenbaas was regarded as one of the leading figures in colour lithography, praised for his technical skill and knowledge of printmaking. International recognition came in 1952 when he was awarded the Premio La Colomba for his printmaking at the Venice Biennale. In October 2006, at a ceremony at Museum Boijmans Van Beuningen, mayor Ivo Opstelten presented Elenbaas with the Wolfert van Boreselen medal for his complete oeuvre. Writer Alfred Kossman characterised his friend Wally Elenbaas as follows: “A man like an olive tree, gnarly, with much grey, capricious in his gestures”.