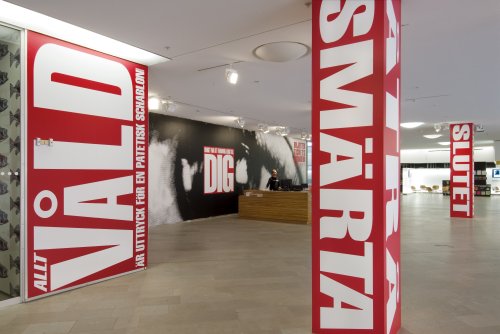 An entirely new work by the American artist Barbara Kruger is installed and on display at Moderna Museet from May 9. The work consists of three large, wall-based collages in the entrances, and embellishment of two pillars in the 4th-floor lobby. Barbara Kruger has applied the style with which she is associated – the colours red and white dominate, black and white photos and text combined in indivisible unity. In recent years, Barbara Kruger’s installations have grown to a monumental format, and this is the case with the work for Moderna Museet. Barbara Kruger mixes her own statements with quotes from Johann Wolfgang von Goethe, Mary McCarthy and Roland Barthes. A central aspect is the human predicament in the segregated, violent and consumerist 21st century world.

Barbara Kruger, born in 1945 in New Jersey, USA, was awarded the Golden Lion in 2005 at the Venice Biennale, the prize given to artists who have influenced the international art scene for a long period. Barbara Kruger began her career in advertising as a graphic artist and art director. She made her breakthrough as an artist in the early 1980s, at around the same time as other American women artists who challenged conventions in the art world, of whom Jenny Holzer, Cindy Sherman, Louise Lawler and Sherrie Levine are the most noteworthy. Barbara Kruger and Jenny Holzer both use text and opted at an early stage to show their works in public spaces such as billboards, bus shelters and facades, rather than in galleries.

Barbara Kruger does not want to be pigeon-holed as a feministic or political artist. But her great interest in globalization and other present-day society issues is obvious in sentences such as WE ARE THE SLAVES OF THE OBJECTS AROUND US or KNOW NOTHING. BELIEVE ANYTHING. The indefensibleness not only of using, but also turning a blind eye to, violence, to treat others as you want them to treat you, and to try to be truthful, are some of the existential issues that Barbara Kruger wants the viewers in Stockholm to reflect on.