This week BECA Foundation Co-Directors, Melissa Roberts and Kurt Schlough, announced the second installment and the expansion of CURATE THIS!, an art exhibition experiment that the artists hatched in January 2008 when they opened the former BECA gallery in New Orleans, LA. The original idea for the experiment came about when the new gallery owners decided that they wanted to add something interesting to what had become a somewhat predictable annual, large scale art event in New Orleans held each year during the month of August. 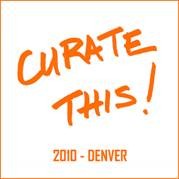 [ad#lb]
The intention was to create an international Call to Artists, receive submissions from artists from around the world and then let anyone with access to the internet and email, vote on the works submitted. The top 4 vote receiving artists would have their works exhibited at BECA gallery that following August. Their decision to hand over the reins to the world public to decide what to put on their gallery’s walls was discussed via the internet on blogs as far away as Germany with the general professional consensus being “…interesting, but they’re new. I wouldn’t make that choice for my gallery operations”. (It should be noted that many gallery directors and other arts professionals did participate in the public vote.)

The public reaction was decidedly different because most of those participating in the public vote from June 18 -21, 2008 had never before been given the opportunity to act as ‘juror’ or ‘curator’ for an exhibition. After the voting concluded, many wrote emails thanking Roberts and Schlough for the interesting opportunity and many wrote that they were exhausted after the voting process and had a new appreciation for those whose jobs it was to act as jurors and curators. Many did not realize how much was involved in preparing the interesting art exhibition at the gallery or museum they had just visited last month in their hometown. When all was said and done, over 100 artists and 400 guest ‘curators’ from 11 countries had participated. The success of, and interest in the experiment surprised Roberts and Schlough and soon thereafter they found out that a similar event/exhibition experiment (but one with much more funding) was about to take place at The Brooklyn Art Museum. With this, Roberts and Schlough felt like they were in good company but that their idea might deserve to be expanded upon.

Using the 25 year old FotoFest in Houston, TX as inspiration, Roberts and Schlough began to consider how to bring their cyber based idea into a city-wide, physical realm. Project funding was not readily available and neither was the initial people power that would be necessary to take the idea to the next level. The international contemporary art exhibition Prospect 1: New Orleans took hold of New Orleans in the fall of 2008 and it served as another inspiring large scale event example for Roberts and Schlough.

In the meantime, Roberts and Schlough were beginning to see firsthand through their emerging artist group exhibition program at BECA gallery that the program was far too small to accommodate the unmet exhibition needs of many talented artists whom they came into contact with on a daily basis. They were also very aware of the multiple roadblocks faced by emerging artists + designers with regards to securing public exhibition opportunities. As a result, in February 2009, Roberts and Schlough founded The BECA Foundation – Bridge for Emerging Contemporary Art for the primary goal of expanding their international group exhibition program for emerging contemporary artists and under-recognized visual artists + designers. Additionally, exhibition opportunities would also be extended to established visual artists + designers who were forging new pathways by exploring new mediums, ideas and processes not previously associated with their work.

Roberts and Schlough traveled to Denver earlier this summer to visit the city for the first time during a working vacation and spoke with local businesses and artists as well as visited many Denver neighborhoods and art spaces to confirm their gut attraction to hold the expanded, second installment of CURATE THIS! 2010 in Denver. They found Denver to be an exciting, vibrant city full of contemporary art + design with a supportive public. All signs that to Roberts and Schlough were an indication of a very healthy city for art + design as well as for its creative producers. In June of 2010, The BECA Foundation will present the much awaited city-wide public exhibition component to CURATE THIS! in Denver, CO during the Denver Biennial of the Americas, a 7 week biennial event focused on progress and possibility, ingenuity and imagination. Don’t look for a $400K CURATE THIS! purse but The BECA Foundation has recently announced that a CURATE THIS! Public Vote Award of $10,000 will be presented to the artist whose work receives the highest number of public votes. The city-wide exhibition event will have both professional curatorial and public vote components. Multiple avenues for artist, designer and public participation outside of the public vote will also be available. Roberts and Schlough state, “While we work to fulfill the mission of our arts organization of creating public exhibition opportunities for emerging and under-recognized artists and designers, what we intend to create via CURATE THIS! 2010 – DENVER are great opportunities and possibilities for everyone who chooses to participate. Every human being located anywhere across the planet will have an opportunity to participate in this event, if they so choose. That doesn’t happen every day, so that alone is very exciting.”

Artists and designers at least 18 years of age from any country will be able to take advantage of a variety of ways to participate. Opportunities will include a review of their submissions by several well respected arts professionals including those with an established history of curatorial practice. There is the aforementioned award of $10,000 and there is also talk of another smaller award in development. The BECA Foundation is also currently working to establish a fund that will assist participating artists + designers with some of their production, shipping and/or installation costs. It is expected that each participating artist will be awarded an equal share of the fund so although helpful, it isn’t likely to cover all production costs. It is estimated there will be approximately 1,000 city-wide exhibit opportunities for registered participating artists + designers.

Initial public participation opportunities being planned include the public vote of art + design both in-person in Denver as well as internationally via an online component. Expect the heavy use of diverse multi-media components as well as other public participation options that are being saved for future announcement. Commercial, academic and institutional tenants and property owners will have the opportunity to apply to register as a CURATE THIS! 2010 – DENVER participating venue to exhibit the work of one or more CURATE THIS! 2010 – DENVER participating artists.

The official CURATE THIS! website will be launched in the near future to keep you updated on future event developments and opportunities. The website will include a downloadable map of CURATE THIS! 2010 – DENVER participating venues, artists, designers and events. Also, a similar CURATE THIS! 2010 – DENVER printed map will be available to the participating and visiting public, free of charge, at a variety of locations throughout the city of Denver. Additional expanded event program development is currently underway and will be announced in the near future.

Future CURATE THIS! events are slated for the cities of New Orleans, Miami and New York.