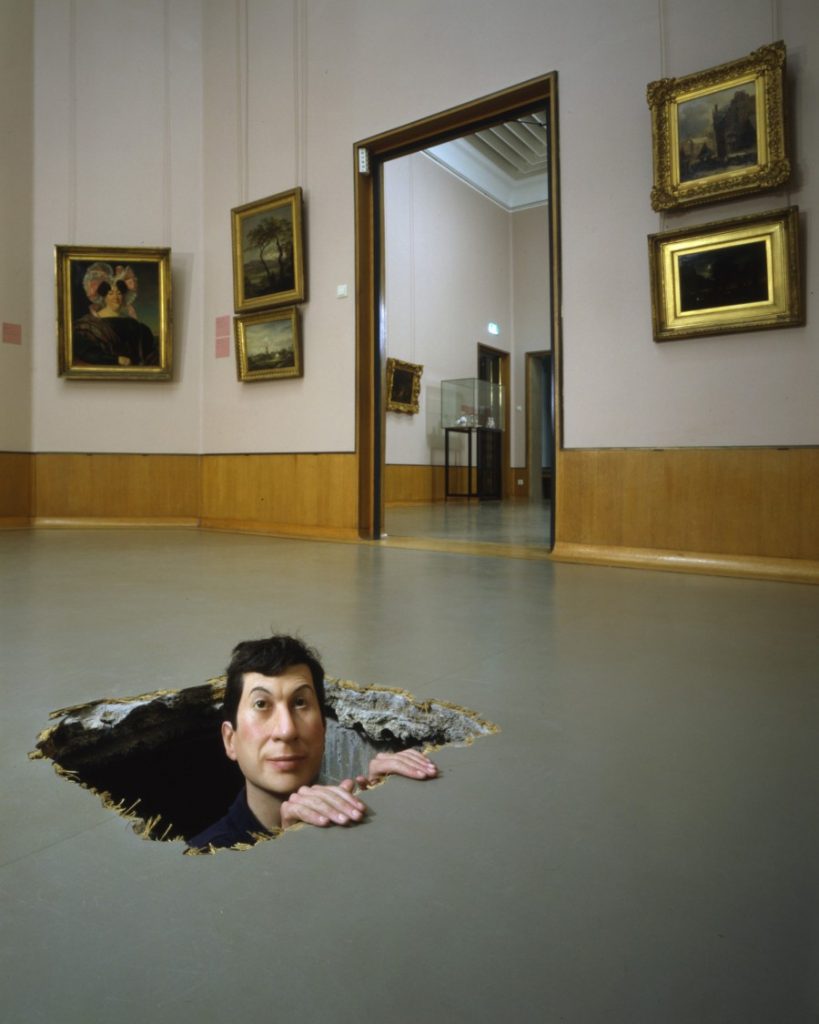 Manhole by the Italian artist Maurizio Cattelan is one of the most popular works of art on permanent display in Museum Boijmans Van Beuningen: Made especially for the museum, the sculpture has been astounding visitors since 2002.

Curious
‘Mr Boijmans’, as Cattelan has dubbed him, pokes his head through the museum floor with infectious curiosity. He stands on a table in the former staff cloakroom, and seems to be breaking into the museum, seen by many as a sacred space in which art may only be enjoyed in serene silence. This work is Cattelan’s comment on the art world. At the same time Manhole is a self-portrait – the image bears a striking resemblance to the artist himself.

Burglar
In October ‘the little man’ will be moving to another chic institution – Monnaie de Paris, housed in a palace in the sixth arrondissement of the French capital. A hole will be made in the floor especially for Manhole so that the man can continue his career as a burglar. The Monnaie de Paris was founded as a mint in 864, but its function is now primarily that of a museum (coins have been minted in the Gironde since 1973). However it still produces 120,000 gold coins a year…

Fascinating
The move is made at the request of the artist himself, who is exhibiting a number of works there from 21 October to 8 January 2017. At the end of October Museum Boijmans Van Beuningen will get in return the 2001 sculpture We, a fascinating work in which two men – asleep but fully dressed – lie in a bed together.

Lavatory Pan
Maurizio Cattelan (Padua, 1960) had no formal art training and had his first exhibition when he was twenty-nine. In his work Cattelan constantly criticizes the art world and many of his sculptures are controversial. In 2001 his kneeling Hitler (HIM) sparked heated discussions. At present Cattelan is in the news with the gold lavatory pan he made for the Guggenheim Museum. The working toilet, ironically entitled America, reminds us that whatever one’s social status everyone has to go to the lavatory. For the last few weeks visitors have been queuing up for it.