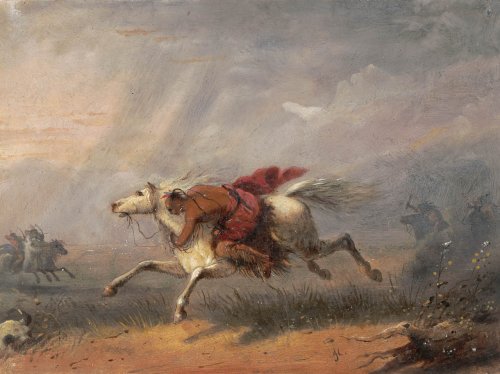 Vibrant and masterful mixed media works on paper by the artist Alfred Jacob Miller, depicting the American West inspired by a six-month expedition in 1837, will be on view in Romancing the West: Alfred Jacob Miller in the Bank of America Collection, an exhibition that opens this fall at The Nelson-Atkins Museum of Art in Kansas City, Mo., then travels to the Museum of Fine Arts, Houston and to the Philadelphia Museum of Art in 2011.

Baltimore native Alfred Jacob Miller (1810–1874) was one of the first American artists to paint the “Far West,” considered at the time as exotic and distant by people living in the East. Bank of America’s 30 sheets, which have not been on view to the public since 1964, feature poetic images of the stunning landscape of early America, the daily life of Native Americans and mountain men, and the exotic wildlife and fauna he observed.

Miller traveled in 1837 with an American Fur Company expedition at the invitation of Scotsman Capt. William Drummond Stewart. The group left in April 1837 from St. Louis and followed what would become the Oregon Trail, then traveled by way of the Green River to Wyoming’s Wind River Mountains.

Miller made more than 100 field sketches during the expedition, and his adventure became the inspiration for at least a thousand paintings and watercolors. For nearly three decades, he received commissions for albums of watercolors and full-sized oil paintings that he produced in his studio. These works from the Bank of America Collection represent intermediary work based on his field sketches and in preparation for works commissioned by patrons.

“We are thrilled to share Miller’s work with the general public,” said Margaret C. Conrads, Samuel Sosland Senior Curator, American Art, at the Nelson-Atkins and curator of the exhibition. “Viewers will find that fact mixes with fantasy to reflect life on the frontier both as it was and as it was imagined to be.”

The exhibition has given curators an opportunity to study Miller’s technique, his view of the West, his broader connection to European and American art, and the importance of his art in a larger context. A catalogue that accompanies the exhibition includes scholarship by Conrads; Stephanie Knappe, Assistant Curator, American Art, at the Nelson-Atkins; Lisa Strong, an independent Miller scholar; William H. Truettner, Senior Curator at the Smithsonian American Art Museum; and Kathleen A. Foster, the Robert L. McNeil, Jr., Senior Curator of American Art at the Philadelphia Museum of Art. Nancy Heugh, a paper conservator, also conducted technical analysis of Miller’s work.

This exhibition is organized by The Nelson-Atkins Museum of Art and is part of Bank of America’s Art in our CommunitiesTM program. Additional support is provided by the Campbell-Calvin Fund and Elizabeth C. Bonner Charitable Trust for exhibitions.

“Bank of America is committed to strengthening artistic institutions and in turn, the communities we serve,” said Spence Heddens, Kansas City Market President, Bank of America. “Sharing our collection with the public through partners such as the Nelson-Atkins not only makes business sense for the bank, but also helps support one of Kansas City’s finest local cultural anchors.”

Through its Art in our Communities program, Bank of America has transformed its collection into a unique community resource from which museums and nonprofit galleries may borrow complete exhibitions. By providing these exhibitions and the support required to host them, this program helps sustain community engagement and generate vital revenue for the nonprofits, creating stability in local communities. By the end of 2011, Bank of America will have loaned more than 40 exhibitions to museums =worldwide.